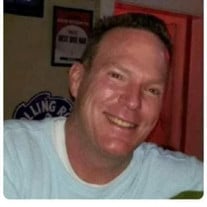 David Lee Hill, (AKA “The Mayor of High Point”) aged 52 of Memphis, TN passed away May 17, 2021 in Nashville, TN. Born July 5, 1968 David was a graduate of Memphis Catholic High as well as a proud “Panther for life” of St. Michael’s School and Church. He went on to study at the University of Memphis and spent most of his career working for Shelby County in the Juvenile and Criminal Court a where he started at the age of 18 and retired at age 43. (Lucky dog – how many others retire that early?) Many will remember “Diamond Dave” for being a regular at various Memphis mainstays including Highpoint Pub, the Orpheum Theatre, local BBQ competitions, and any television that had the Memphis Tigers playing. David was quick to befriend strangers and was beloved by many friends and acquaintances. He most loved his “womb to tomb” childhood friends from school and the Highpoint neighborhood. David leaves behind a close knit family of sisters, cousins, and nieces and nephews. His eldest sister who helped keep his nose clean and hair brushed while growing up, Laura Jo Lovins of Memphis and her children Stefanie and Mitchell Lovins also of Memphis. His middle sister who taught him how to fight for himself Mary Christine Hill of Nashville and her children Christopher and Harrison Miller-Hill also of Nashville. His younger sister who tried her best and succeeded in keeping him on right path, Jean Ann Hill Reed of Memphis and her children Jacob Harris of Bartlett, and Patricia Harris Pignataro of Boston, MA. His youngest sister, Amy Walden whom he reconnected with 7 years ago, and her children Amber King, Angela Walden and Anthony Walden also of Terry. MS. David’s nieces and nephews beloved their “Unc Crunk” and he was an important figure at every sports game, birthday party, and family dinner. David also leaves behind cherished grand nieces and nephews: Chase and Jacob Harris Jr, Skylar and Johanna Lovins, Landon and Lettie Lovins and Ellie King. David was met at the pearly gates of heaven by his beloved mother Patricia Christine Pencheff Hill and father Amos Lee Hill Jr., favorite Uncle Tom and his faithful furry companion Beaucephus (Bo). Service will be held at St. Michael’s Catholic Church on Tuesday June 1st at 10 am. The family will receive guest from 9:00 am to beginning of service at St. Michael’s outdoor patio. A private burial will follow. High Point pub will have a celebration of David’s life beginning at 1:00 pm on the day of the service. In lieu of flowers, the family request memorials be sent to Room In the Inn, 409 Ayers Street, Memphis, TN 38105 or St. Michael Catholic Church, 3863 Summer Ave, 38122.

The family of David Lee Hill created this Life Tributes page to make it easy to share your memories.

Send flowers to the Hill family.