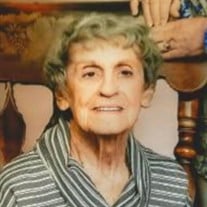 Darlene Fredericksen Ryan was a devoted daughter, sister, wife, mother, grandmother, great grandmother, friend and Catholic woman for 90 years. She spent countless years raising children, attending masses and living by the teachings of the church by honoring the sacraments of the Eucharist. She was a fiercely independent woman of great wisdom, who knew the meaning of hard work. There was never a task too large or too small that she wouldn’t tackle without complaint. Darlene lead by example; never quit; always put your best effort forward; life’s most valuable lessons are learned through your failures and mistakes; there is no excuse for making the same mistake twice and if you do, be brave enough to pay the consequences. Darlene’s life began on March 27, 1931, in Chicago, Illinois along with her three brothers Edmund, James and Bill. They were the children of Edmund Fredericksen and Bonita Spiers. Her family relocated to Detroit, Michigan and in 1951 Darlene met her husband, Rex Ryan. Their union produced 5 children in 7 years. Then a job transfer moved the family to Memphis Tennessee where they raised the “Ryan Clan”: Jim, Terry, Kevin, Shannon and Rex. Darlene worked hard and played hard. She was an award winning bowler, an avid golfer and played countless card games of bridge with friends over the years. She was an experienced seamstress and had a great sense for style and fashion. Darlene and Rex were remarkable hostesses and enjoyed entertaining in their home. If you were fortunate enough to be a guest, you know what a good time was had by all. Their St. Patrick’s Day parties were some of the most memorable, where the cold green beer was drawn from a home bar tap, Irish folksongs sung by the player piano and an impressive spread of food fit for a king! Her home and especially her kitchen was the gathering place for family and friends. The back door was always unlocked, a pot of coffee was always warm and a second frig was always stocked with cold beverages to share. Her Christmas cookies and fudge were house favorites along with her German cuisine of klaza dumplings with pork, potato pancakes and rice soup with plots. And whether you were hungry or not, a place would be set at the dinner table especially for you. Darlene’s life was well lived. Her grace as a woman, devotion to her church, dedication and unconditional love for her family will remain her legacy. She leaves behind her family of five children and spouses: Jim & Patty Ryan of Belgium Wisconsin, Terry & Carol Ryan of Arlington, Tennessee, Kevin & Sharon Ryan of Stanley, North Carolina, Shannon & Nelson Fleet of Cordova, Tennessee and Rex & Beth Ryan of McKinney, Texas; twelve grandchildren and spouses; seventeen great grandchildren and one great great granddaughter. Awaiting her arrival in heaven are her mother, father, 3 brothers, husband, 1 grand child, 1 great grandchild and many relatives and friends.

The family of Darlene Delia Ryan created this Life Tributes page to make it easy to share your memories.

Send flowers to the Ryan family.