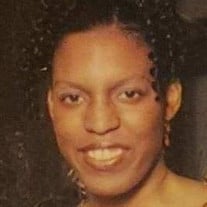 Danielle Regina Benson, 35, passed away on September 21, 2020.“And God shall wipe away all tears from their eyes; and there shall be no more death, Neither sorrow, neither shall there be any more pain; for the former things are passed away.” Revelation 21:4 Danielle Regina Benson, the beloved daughter of Rose M. Benson and Reginald Thomas, was born July 16, 1985, in Fort Hood, Texas. September 19, 2020, after many battles fought and many victories won, she transitioned into Heaven to be with the Lord for eternal rest. Danielle grew up in Memphis, Tennessee. She was baptized at an early age and accepted the Lord Jesus Christ as her personal Lord and Savior. Though she grew up in Memphis, she remained a loyal Dallas Cowboy fan due to her roots in Texas. Throughout her life, she had an insatiable appetite for learning and adventure - attributes that were the cornerstone of her life. Her “can do” attitude and spirit prevented her from letting anything get in the way of her ambitions. During the summer months of her high school years, she participated in various summer camps and learned many lifelong leadership skills. Two notable camps that she attended were the Robinsonville JROTC Summer Camp where she learned to rappel and The Citadel Summer Camp in Charleston, South Carolina. Danielle was an excellent student and graduated with honors from Raleigh Egypt High School. She was also awarded certificates of recognition for Computer Technology from the American Legion for Scholastic Excellence which was sponsored by the Memphis American Legion, Post No 1, The Military Order of the Purple Heart of the United States of America, Inc. for successfully completing the United States Air Force South Carolina AFJROTC Cadet Officer Leadership School, and the Business Professionals of American State Competition. She distinguished herself, rising from the rank of Sergeant to Cadet Officer in her senior year. Danielle set goals, had high expectations for herself, and took advantage of every opportunity. She worked diligently in pursuit of becoming an aviator. She applied and was accepted into the Delaware State University Aviation Program during the summer of 2004. She learned to fly a single-engine aircraft and had to perform a solo flight in order to graduate. She successfully met the criteria. She always said, “I knew how to fly a plane before I got my driver’s license.” Danielle was always a writer, and as a child, wrote short stories that her mother didn’t always understand but encouraged her. Danielle’s writing skills were honed in high school by two special teachers - Mrs. JoAnn Hollenbach and Mrs. Sherry Simmons. Her compositions were well-composed and expressive; however, she was dismayed when Mrs. Simmons used one of her papers that she said was still in draft form as a model for the class. Her excellent composition skills earned a perfect score on her first writing assessment test. Danielle’s love of education never ceased and continued with her acceptance into Xavier University - New Orleans, Louisiana, Middle Tennessee State University- Murfreesboro, Tennessee, and later, the University of Missouri-St. Louis, St. Louis, Missouri where she pursued a degree in Computer Science/English. She loved the written word and tutoring others. She developed a love for using that “red pen” - a skill inherited from her two favorite teachers. She tutored young girls in St. Louis, volunteered with the Porter Leath Ragin Cajun Festival in Memphis and volunteered as well participated in Zombie Runs and the Glow Run. In 2007, Danielle was selected to participate in the prestigious Walt Disney Professional Internship Program where she worked side-by-side with industry leaders in Orlando, Florida. During the summer of 2010, she was selected to participate in the Defense Information System Agency (DISA) as an Intern and worked in the Computer Science Directorate. Danielle’s work experiences spanned various industries from retail to mortgages. She worked as a Disclosure Specialist for State Farm from August 2012 to December 2016, in St. Louis, MO. In 2017, she was promoted to a Post Closure position with State Farm in Phoenix, AZ. In February, she accepted a position with American Home Mortgage as a Post Closer and a Closer. With limited training as a Closer, she exceeded the required number of closing six loans per day. August 24, 2020 was the first day of her dream jobs with Celebrity Home Loans where she was employed until her demise. Danielle loved and appreciated life and lived each day fully. Her experiences were vast. Her extensive foreign and domestic travel gave her unique experiences that broadened and enriched her life as well as the lives of so many others. Her adventurous, loving spirit will be remembered and cherished. She was preceded in death by her grandfather, Ulysses Benson and her grandmother, Ms. Martha Thomas. She leaves to cherish her memory: her mother Rose M. Benson, her father Reginald Thomas (Valerie), her dearly beloved brother, Derrick E. Benson and a host of family and friends. A gathering of family and friends will be held Thursday October 1, 2020 from 5:00 PM until 7:00 PM. A Celebration of Life Service will be held Friday October 2, 2020 at 1:00 PM at Memorial Park Funeral Home Riverside Chapel. A graveside service will immediately follow at Pleasant Rest Memorial Gardens. To view the Celebration of Life Service click the following link: http://webcast.funeralvue.com/events/viewer/37976 To view the tribute slideshow click the following link: https://www.tributeslides.com/tributes/show/87DCC8FXGN2JT8D4

Danielle Regina Benson, 35, passed away on September 21, 2020.&#8220;And God shall wipe away all tears from their eyes; and there shall be no more death, Neither sorrow, neither shall there be any more pain; for the former things are passed... View Obituary & Service Information

The family of Danielle Regina Benson created this Life Tributes page to make it easy to share your memories.

Send flowers to the Benson family.