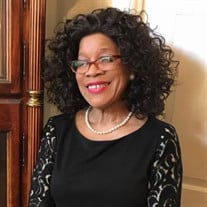 Cynthia Lorraine Thomas Heyward was born March 2, 1953, in Brooklyn, New York to parents, Charles Timothy Thomas and Esther Diane Ferguson. She was one of four children, two sisters, Gloria Thomas Hubbard and Lisa Thomas Tucker, as well as one brother, Charles Timothy Thomas, Jr. Though born in Brooklyn, New York, Cynthia grew up in the small town of Camden, South Carolina, right outside of Columbia. She was an active member of Edward's Chapel A.M.E. Zion Church where she always made her presence known as the "best soprano on the junior choir" and consistently served as the Sunday School youth representative at various youth conferences. After graduating from high school in 1971, Cynthia chose to attend the one and only South Carolina State University, home of the "Almighty Bulldogs." Not only did the school offer her the chance to pursue her life long passion of a degree in speech pathology but be introduced to her college sweetheart, future Army officer, Randy Heyward. In addition, Cynthia happily became a member of the sisterhood, Alpha Kappa Alpha Sorority, Inc. After earning her Bachelor of Arts in Speech Pathology and Audiology in May 1975, Cynthia and then 2nd Lieutenant (US Army), Randy R. Heyward wasted no time in starting their fairytale together as husband and wife, marrying on June 14, 1975. In 1983, Cynthia finally became a proud mother to their first and only girl, Crystal. Two sons later followed, Randy Jr., who she affectionately called "RJ" and Ryan. With education always being one of her "true loves," Cynthia never let the responsibilities of being an Army wife keep her from her passion of speech pathology. Cynthia's maternal grandmother, Rebecca Ferguson, was her prime influence in her love of speech. She spent many summers with her ill grandmother as a child/pre-teen, assisting her & the speech therapist with the slow and often frustrating process of regaining her speech post stroke. That zeal and commitment never ceased. Cynthia remained steadfast in her goal of improving the lives of children and all clients through early intervention and dedication. She was quoted as saying, "communication is the key that unlocks the mysteries of the world for everyone and I will always be determined to help my students to reach their communication goals." Employed in her field everywhere from Germany to Germantown, TN, Cynthia Heyward worked tirelessly in her profession for over 30 years, her longest tenure for Shelby County Schools. She has been awarded countless honors including but not limited to: "Teacher of the Year Award" (Highland Oaks Elementary). Cynthia loved Jesus, making memories with her friends and family, giving gifts, shopping at Chicos and being with her one and only grandchild more than anything. She loved attending Hope Church in Cordova, TN and looked forward to any opportunity to travel with her family. Her memory will continue to live on through her mother, Esther Thomas; three children, Crystal, Randy Jr., and Ryan Heyward; One Granddaughter, Reyana Heyward; Two Sisters, Gloria Hubbard and Lisa Tucker. One Brother, Charles Timothy Thomas Jr; One Brother-in-Law, W. Rowland Heyward; Three Nieces, Karen and Kenya Hubbard and Samantha Gray Mickens; Two Nephews, Justin and Charlie Tucker and a host of other cousins, nieces, nephews, other relatives and dear friends. The family will receive relatives and friends on Friday, April 30 from 5:00 p.m. to 7:00 p.m. at Memorial Park Funeral Home, 5668 Poplar Ave, Memphis, TN, 38119. (901) 767-8930

The family of Cynthia Lorraine Thomas Heyward created this Life Tributes page to make it easy to share your memories.

Send flowers to the Heyward family.