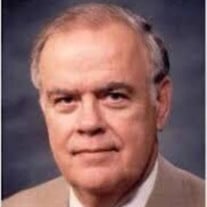 Judge Curtis Standifer Person, Jr. passed away peacefully on September 4, 2020, at Belmont Village Assisted Living in Memphis. Born on November 27, 1934, in Memphis, TN, he served his fellow Memphians for most of his life. Curtis is survived by his five children and step-children, Kathleen Person Longoria, Curtis S. Person III (Barbara), Dr. Patrick R. Person (Amy), Charles Couch (Linda) of Alpharetta, GA, and Christopher S. Person. He also leaves behind his sister, Dr. Patti Person Ray (Barry). Curtis was preceded in death by his beloved wife of 47 years, Geraldean Smith Person, and his parents, Curtis and Helen Person. He was blessed with 10 grandchildren, Dr. Ritchie Longoria (Chris), Jesse Longoria (Kailyn), Katie Longoria, Curtis S. Person IV, Cody Person, Kendall Person, Austin Person (Amy), Caleb Person ( Abbey), Carson Couch and Cameron Couch, as well as four great-grandchildren, Paxton, Ryder, Henley, and Monroe Longoria. He is also survived by two nephews, Wade Crump (Chad) and Wesley Crump (Stephanie). Curtis lived a life devoted to serving the community of Memphis and the state of Tennessee. He graduated from Memphis State University in 1956 and received his J.D. from the University of Mississippi in 1959. He served 40 years as a state legislator, first as a Representative and then as a Senator from 1968-2006. He was the Chairman of the Senate Judiciary Committee for 33 years and was a member of many House and Senate Committees. He received many honors and distinctions during his tenure, including a certificate of appreciation for his dedication and outstanding service to the citizens of Tennessee signed by all five members of the Tennessee Supreme Court. At the time of his retirement, he shared the distinction of longest uninterrupted term in the Tennessee legislature. During his illustrious career, he is most proud of the legislation he passed requiring newborns receive the PKU test, helping countless children and families. In 2006, at the age of 72, when most men would have been eyeing retirement, Curtis continued to serve his community. He was elected Judge for the Shelby County Juvenile Court and served from 2006-2014. During his term he was again honored with many distinctions, including the Kenneth A. Turner Juvenile Justice Award from the Tennessee Department of Children’s Services, the Equal Access to Justice Award from the Tennessee Alliance for Legal Services and an appreciation award from the Tennessee Juvenile Justice Community. In honor of his commitment to the community, Governor Phil Bredesen declared May 13, 2009, as “A Day of Recognition for Senator Curtis S. Person, Jr.” Curtis also loved his Memphis Tigers and was the founder and charter president of the University of Memphis Tiger Rebounders Club. He received the Distinguished Alumni Award in 1982 and in 2007, as well as the University of Memphis Eye of the Tiger Award in 2007. The Senator Curtis S. Person Student Plaza was dedicated in his honor. Visitation will be held Wednesday, September 9th from 11:00-1:00 with a service immediately following at Memorial Park Funeral Home on Poplar. The family requests that in lieu of flowers, please send donations in memory of Judge Curtis S. Person, Jr. to the Memphis Humane Society or to Kitty City, P.O. Box 25034, Memphis, TN 38125.

Judge Curtis Standifer Person, Jr. passed away peacefully on September 4, 2020, at Belmont Village Assisted Living in Memphis. Born on November 27, 1934, in Memphis, TN, he served his fellow Memphians for most of his life. Curtis is survived... View Obituary & Service Information

The family of Judge Curtis S Person, Jr. created this Life Tributes page to make it easy to share your memories.

Send flowers to the Person, family.