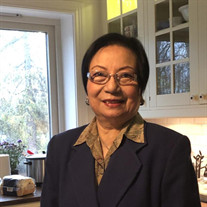 Concepcion Carollo (Connie) Tepacia Bryant Concepcion Connie Bryant, 72, of Memphis, TN, passed away Friday, May 22, 2020 following complications from a massive stroke. Connie, as she was widely known, was a devout Catholic who followed the order of St. Michael. She regularly attended mass at St. Brigid Catholic Church and Mary, Queen of Peace Catholic Church, and St. Ann Catholic Church. A memorial service celebrating Connie’s life will be held Tuesday, June 2, at 2PM at St. Brigid Catholic Church in Memphis. Visitation will be from 1PM-2PM on Tuesday, June 2 at St. Brigid’s, just prior to the funeral mass. Burial services will follow at Pleasant Hill Cemetery near Lorado, AR, but it will occur at a later date; arrangements are incomplete at this time but will be announced soon. Concepcion (Connie) was born near Cebu City, in the Philippines. She first lived in the United States, beginning in 1970, in Oak Grove Heights, Arkansas; moving then to Paragould and on to Jonesboro, Arkansas by early 1992. Connie moved to Memphis in 1994, where she established many important friendships from her work at Nike Corporation, the Catholic Church, the Filipino community, and non-profit and outreach organizations for the poor, sick, elderly, and teenage youth. Together with her community and devotion to service, she lived the remainder of her life. Connie is survived by her son Mark (LaDonya) Bryant of Jonesboro, Arkansas, her daughter Angela (Kristoffer) Ryden of Sigtuna, Sweden; a brother, Eduardo Tepacia; three sisters, Felina Tepacia, Consolacion Tepacia, Carmencita Tepacia , all of Cebu, Philippines. Four grandsons: Gage Gaines, Nicholas Bryant and Noah Bryant of Jonesboro, Arkansas and Johan Ryden of Sigtuna, Sweden; two granddaughters; Ashton Bryant of Jonesboro, Arkansas and Anna Ryden of Sigtuna, Sweden; and many cousins, nephews, nieces and friends who she considered family. Connie was preceded in death by her husband, Eugene Bryant, her parents, Sebastian and Francisca Tepacia; and brothers, Lorenzo, Roberto, Baltazar, and sisters, Filomina and Erodita.

Concepcion Carollo (Connie) Tepacia Bryant Concepcion Connie Bryant, 72, of Memphis, TN, passed away Friday, May 22, 2020 following complications from a massive stroke. Connie, as she was widely known, was a devout Catholic who followed the... View Obituary & Service Information

The family of Connie Bryant created this Life Tributes page to make it easy to share your memories.

Send flowers to the Bryant family.