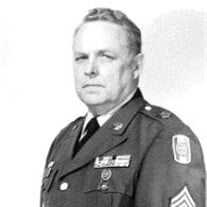 Claud Jackson Thomas, age 90 of Memphis, TN passed away on June 20, 2020. Jack was born in Jackson, TN on February 21, 1930. He joined the army in 1947 at the age of 17. He went on to fight in the Korean war with two extended tours of duty. Jack completed 31 years of military service. 23 years in the Tennessee National Guard. When he returned home from the war, He went to work for the telephone company. He worked for South Central Bell for 35 years retiring on December 12, 1986. It was there he met a young woman named Mary. They were married on June 6, 1953. They were married for sixty six years. Jack enjoyed working in the yard, building and repairing things, he even built his own garage. Jack had several hobbies through the years including photography, ham radios, and computers. He enjoyed sports and was a Memphis Tiger fan. He was devoted to the Lord and his church family. He spent a lot of time working at his church doing maintenance, repairs and serving in any way needed. He was a generous man always ready to give help and assistance to those in need. He is much loved and will be missed. He is predeceased by his wife Mary. He is survived by his two children, a son Bob (Ellen) Thomas and a daughter Lynne Ferris; three grandchildren, Rob (Shawna) Thomas, John (Jennifer) Ferris, and Josh (Jena) Thomas; and 6 great grandchildren, Hunter (Alexis), Lauren, Madison, Aaron, Chase and Elyse (on the way). The family will receive friends on Monday, June 29th from 10:00am to 11:00am with a graveside service beginning at 11:00am. at Memorial Park Funeral Home. Interment will follow at Memorial Park Cemetery.

The family of Claud Jackson Thomas created this Life Tributes page to make it easy to share your memories.

Send flowers to the Thomas family.