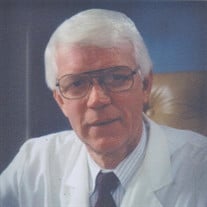 Clair Edward Cox, II, M.D. was born September 2, 1933 in the rural community of Saint Francisville in Southeastern Illinois, the only child of Maye Judy Cox and Clair Edward Cox. He died at home on July 9, 2020 in Memphis, Tennessee surrounded by his family. Dr. Cox is survived by his loving wife of 61 years, Clarice Wicks Cox and their four sons; Clair Edward Cox, III (Suzanne) of Hernando, MS, Danny Paul Cox (Pat) of Memphis, Kevin Christopher Cox (Carmen) of Memphis, and Kenneth Harold Cox (Melanie) of Memphis. He was extremely proud of his twelve grandchildren; Clair Edward, IV, Luke Wallace and Adele Ruth (triplets) (Clair III), Daniel Paul, II and Cooper William (Danny), Mae Elise, Benjamin Christopher and Lily French (Kevin) and Oliver Yoste, Della Suzanne, Clarice Virginia and, James Woodard Curry, III (Kenneth). As an infant, he moved with his family to Mt. Pleasant, Michigan where he completed high school, excelling in scholarship and athletics. After three years as an undergraduate on a Regents Alumni Scholarship at the University of Michigan, he entered the University of Michigan Medical School and graduated with an M.D. in 1958. Subsequently he completed his surgical residency at the University of Colorado, Denver and then his urological residency at the University of California, San Francisco in 1963. He then began the academic practice of urology at the Bowman Gray School of Medicine (now, Wake Forest Medical School) in Winston-Salem, North Carolina. He advanced to the rank of Professor and in 1972 was recruited to Memphis as Professor and Chairman of the Department of Urology at the University of Tennessee Health Science Center. Dr. Cox held this position for twenty-seven years before stepping down as Chairman in 1999 and subsequently retiring from the University in 2009. Dr. Cox and Clarice Adele Wicks met when he was a sophomore medical student and she was a junior nursing student, both at the University of Michigan in Ann Arbor. They married in 1958 upon his graduation. They had a memorable life together with many mutual interests; rearing four boys, worldwide travel, nature walks on their farm in Hernando, birding, sporting events and, most recently, attending numerous grandchildren’s activities. He was a longstanding member of Second Presbyterian Church and a six year board member of Briarcrest Christian School. He was a member of Memphis Rotary Club and the Memphis Medical Seminar. He was a member of several professional organizations including the American Medical Association, American Urological Association, American College of Surgeons, Infectious Diseases Society of America and the American Association of Genitourinary Surgeons. Dr. Cox considered his most rewarding professional accomplishment to be the training of ninety urological residents by the University of Tennessee Medical School Department of Urology during his tenure as Chairman. At least half of these trainees are still practicing Urology in Memphis and the surrounding region. Since retirement, Dr. Cox was often found at his farm in Hernando or attending grandchildren’s functions. A private burial will be held on Saturday, July 11, 2020 at Memorial Park Cemetery, 5668 Poplar Avenue in Memphis, Tennessee. In lieu of flowers the family suggests sending memorial contributions to the charity or ministry of their choice.

Clair Edward Cox, II, M.D. was born September 2, 1933 in the rural community of Saint Francisville in Southeastern Illinois, the only child of Maye Judy Cox and Clair Edward Cox. He died at home on July 9, 2020 in Memphis, Tennessee surrounded... View Obituary & Service Information

The family of Clair Edward Cox, II, M.D. created this Life Tributes page to make it easy to share your memories.