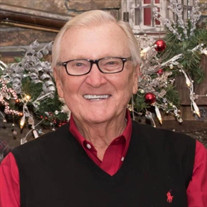 Charley Lee Jones, age 79, passed away peacefully surrounded by his family on December 24, 2021. He was born September 21, 1942 in Memphis, Tn. He was a graduate of Kingsbury High School class of 1961. He served in the Air National Guard and then spent his remaining hard-working years until retirement as a general contractor and owner of Atwill Refractory. He was a faithful member of the Raleigh Seventh Day Adventist Church. Charley was the youngest of eight children and a devoted family man. His hobbies included hunting, fishing, and spending time with his loved ones. He was blessed to hunt and fish all over the world. He loved gardening and spending time at his second home on Pickwick Lake. He always had a positive attitude and the best outlook on life. His infectious laugh and smile will be missed by so many. Charley is survived by his loving wife of 60 years, Sandra Morgan Jones, and leaves behind two children; Tracey Fredette and Chris Jones (Andrea). He also leaves behind four grandchildren; Michael Jones, Lauren Fredette, Nicholas Jones, and Madeline Fredette. In addition, he leaves his brothers Jerry and Robert Jones and sister Alcy Buckman. Lastly, he leaves behind his sister-in-law Marsha Olds; nieces, nephews, and many great nieces and nephews. Charley is preceded in death by his parents Bennie Jones Sr. and Dorthy Walker Jones; his oldest son Charley Jones Jr. (Chuck), brothers; Bennie Jones Jr. and William Jones (Bill), sisters; Evelyn Stevens and Joanna Koonce. He also joins his mother-in-law, Thelma Morgan; his brother-in-law, Keneth Jerry Olds and nephews; Bennie Jones III and Randy Buckman. The family will receive visitors at Memorial Park Funeral Home and Cemetery, 5668 Poplar Ave, on Friday December 31st from 11:00 a.m. to 1:00 p.m. followed by the funeral service at 1:00 p.m. To view click the link below view the memorial tribute video. https://www.tukios.com/videos/video_details/1364330 To view the funeral service online click the link below. http://webcast.funeralvue.com/events/viewer/66184/hash:610E5315D64AA088

Charley Lee Jones, age 79, passed away peacefully surrounded by his family on December 24, 2021. He was born September 21, 1942 in Memphis, Tn. He was a graduate of Kingsbury High School class of 1961. He served in the Air National Guard and... View Obituary & Service Information

The family of Charley Jones created this Life Tributes page to make it easy to share your memories.

Send flowers to the Jones family.