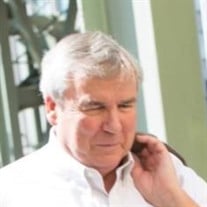 Charles Daniel “Dan” Rambo, 80, of Memphis passed away February 15, 2021 from complications of Covid-19. Dan was born in Memphis, TN and spent most of his life in Memphis. He attended the University of Tennessee and graduated with a Bachelors degree in Business Administration. At Tennessee he became a member of Sigma Alpha Epsilon fraternity, a lifelong fan of the Vols, and most importantly, met and married Susan Bragg Hillis from McMinnville, TN. Dan served in the Air Force after college, earning the rank of Captain. After his basic training in Tucson, he was assigned to Tripoli, Libya, where his oldest son, Richard, was born. While in the Air Force, he traveled throughout Libya, Italy and France. Dan’s vocation after the Air Force was as a General Contractor primarily focusing on building homes all throughout Shelby County, with some hotels in South Carolina and Ohio as well. He was one of the first builders to become involved in the Harbor Town development in Downtown Memphis and won multiple awards for those projects. He was a member of Christ United Methodist Church, and in his retirement years was an active volunteer in several organizations that worked to feed the underserved and unsheltered in Memphis and beyond. Dan was preceded in death by his wife of 47 years, Susan, his parents, Charley and Florence, and his brother Dick. He leaves behind two sons, Richard and Andy (Molly), 5 grandsons who adored him (Patrick, Daniel, Will, Andrew, and Thomas), and his sister Mary Ann McDow (Clarkson). Due to COVID restrictions, a small service for family will be held on February 23. A celebration of Dan’s life will be live-streamed from the Facebook page of his son Andy at https://www.facebook.com/arambo/posts/10159448172454345 at 11:00, February 23. In lieu of flowers, memorials may be made to Team Laeth ministry to homeless persons at Memphis First United Methodist Church.

Charles Daniel &#8220;Dan&#8221; Rambo, 80, of Memphis passed away February 15, 2021 from complications of Covid-19. Dan was born in Memphis, TN and spent most of his life in Memphis. He attended the University of Tennessee and graduated with... View Obituary & Service Information

The family of Charles Daniel "Dan" Rambo created this Life Tributes page to make it easy to share your memories.

Send flowers to the Rambo family.