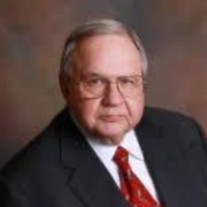 Charles Robert Perkins Born March 19th, 1936 Died December 4th, 2021 Charles Robert Perkins, 85 years of age, the son of Jennelyn Hawkins Perkins (deceased), and Charles Dwight Perkins (deceased), was born in Greenville, Illinois, and grew up in Jackson, Tennessee. He passed away peacefully at his home in Nashville, Tennessee, and into our heavenly Father’s arms surrounded by his loving and devoted family including his wife Peggy Perkins, along with his three daughters, granddaughter and grandson. Charles Perkins, or “Charlie” as he was known, lived an exemplary and remarkable life. He was a devout believer and man-of-God, who lived as a wonderful husband, father, grandfather and father-in-law to his family. His life was a great example to all by the Christian life he lived full of wisdom, generosity and service. In his earlier life he was a Lieutenant in the United States Navy, serving during the Cuban Missile Crisis. Later in life Charles was a respected attorney and government official throughout his professional career for over 60 years in Memphis/Shelby County Tennessee. He became an attorney in 1967 as a graduate of the first and charter law school class from Memphis State Law School. He was licensed to practice law in Tennessee, admitted to the Tennessee Supreme Court, U.S. District Court, U.S. Supreme Court, and was a member of the American Bar Association, Tennessee Bar Association, and Memphis and Shelby County Bar Associations. His clients included major corporate businesses, a major bank, and serving as attorney for the City of Memphis along with MLGW in hundreds of complicated matters extending over 52 years. Known as the “Dean of Shelby County Government”, Charles brought leadership and wisdom in all his public service, with a notable skill shown in counseling others with forward thinking vision and in bringing people together. Charles served with distinction as a member of various Boards and Commissions, including the Shelby County Board of Commission, from 1972 thru 1994 and as its Chairman from 1978 thru 1983, and again in 1994; he was directly responsible in working with the state legislature to establish the Chickasaw Basin Authority, chairing its Board for 35 years; he also chaired the renovation of the historic Shelby County courthouse and law library with meticulous skill and oversight. He again worked with the state legislature in 1976 helping create and establish the Mayor/Commission form of government that we know today. In later years he also helped create and establish the state’s Tiny Town formation laws and served as City Attorney for the Town of Arlington. He also served on the Union University Board of Trustees, the school having held a special place in his and his wife Peggy’s life as the place they first met. Charles Perkins was also recently honored with a special dedication and award for his service by Shelby County Government. He is survived by his loving wife Peggy Trevathan Perkins, married for 63 years; and his brother Bill Perkins (Sandra); and preceded in death by his mother Jennelyn Perkins and father Dwight Perkins, and sisters Mary Jane Perkins, and Suzanne Perkins. His surviving children Gretchen Thorogood (Will); Kevin Perkins (Cindi); Tracy White (Ross); Stacy McLallen (John). Grandchildren: John Radford Taylor; Kate Taylor Meador (Andrew); Peggy McLallen Duncan (Edward); Andy Perkins; Jack McLallen, Emily White Owings (Stephen), Charlie White; and three great grandchildren Addison Duncan, Ruthie Duncan, and Elizabeth Meador. The family will receive relatives and friends on Thursday, December 16 at 12:30 p.m. with a funeral service to follow at 2:00 p.m. all at Forest Hill Baptist Church, 3645 Forest Hill Irene RD, Germantown, TN, 38138. The burial will take place at West Tennessee Veterans Cemetery. In lieu of flowers please donate to Union University, Attn: Advancement Office, 1050 Union University Dr., Jackson, TN 38305 www.uu.edu/advancement/giving Memorial Park Funeral Home and Cemetery, 5668 Poplar Ave, Memphis, TN, 38119. (901) 767-8930

The family of Charles Robert Perkins created this Life Tributes page to make it easy to share your memories.

Send comfort and support when it's needed most.