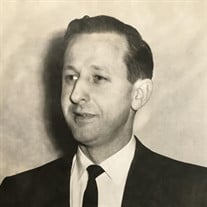 Dr. Charles Lindy Lewis passed away peacefully January 16, 2020, with his son Charles by his side. Dr. Lewis was born in Kebil, Kentucky on November 17, 1928 to Lottie May Ferguson Lewis and Mack Octavis Lewis. His mother died when he was 6 years old after giving birth to his younger brother, Morris Thomas (Lewis) Clark in the middle of the Great Depression. He grew up on a farm in Monkey’s Eyebrow, Kentucky with his Father and two older brothers, Mack Octavis Lewis, Jr. and James Paul Lewis. He joins his brothers Mack and Morris, his parents, his beloved wife of many years, Darden Nelle Lewis, and his granddaughter, Megan Elizabeth Shepherd in Heaven. He is survived by his children, Charles Wayne Lewis of Memphis, Tennessee, his daughter , Janet Lynn Lewis Shepherd of Ponte Vedra Beach , Florida , along with four grandchildren, who he loved and was so proud of , Robert , Gracie , William and Anna Shepherd; his brother James Lewis of Paducah, Kentucky, along with nieces and nephews. He loved his family dearly and was a wonderful husband, father and family man. Charles graduated from Union University and Southern School of Optometry, where he worked to put himself thru school selling books and bibles for Southeastern Books and other jobs. He would brag as he drove that he had once worked as a taxi driver! After graduating from optometry school, he joined the U.S. Army, where he served for four years. He went on to serve in the Army Reserve for twenty years. He met his loving wife, Darden Nelle Williams, who he adored more than anyone, at Bellevue Baptist Church, where they both attended and were married. He loved his optometry business and his patients! He worked long hours because he was a hard worker by nature and because he loved what he did. He recently stated that he felt very blessed to have loved what he did for a living and he practiced optometry up until July of this year. He once owned a laboratory L & M Optical, where he made his own lenses but later sold it. His wife and son both worked with him, helping him to run his practice, so he was able to be with family while he worked. He thought of his other employees as extended family. He greatly appreciated Dorothy Holmes, who helped him for many years. Dr. Lewis was friendly with everyone he met and always had a kind word to say. He kept a positive outlook on life and when asked how he was doing, he would reply, “super-good!”, while he told everyone to “make it a fantastic day!” He had a kind, loving , giving heart and was always ready to help someone in need or share the gospel with them. He had a strong faith and put Jesus first in his life. He lived by the book of Proverbs and Dave Ramsey. He was loved by many and will be sorely missed by his children, extended family , patients, friends, and acquaintances that he met along the way. But mostly Dr. Lewis would want you to smile and make it a good day , as he did every day! He will live on in our hearts forever. The family invites relatives and friend to gather on Monday, January 20 from 12:00 pm until the time of the funeral service at 1:00 pm at Memorial Park Funeral Home and Cemetery. At the request of the family, memorial contributions can be made in Dr. Lewis' memory to St. Jude’s Children’s Research Hospital.

Dr. Charles Lindy Lewis passed away peacefully January 16, 2020, with his son Charles by his side. Dr. Lewis was born in Kebil, Kentucky on November 17, 1928 to Lottie May Ferguson Lewis and Mack Octavis Lewis. His mother died when he was 6... View Obituary & Service Information

The family of Charles Lindy Lewis, O.D. created this Life Tributes page to make it easy to share your memories.

Send flowers to the Lewis, family.