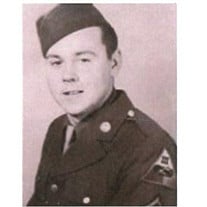 Born June 1st, 1923 in Coffeeville, Mississippi, son of Creston Young and Claudine Hyde Spearman. He attended Skuna Valley Grade School and Coffeeville High School before entering military service the weekend after high school graduation. He trained at Camp VanDorn in the 163rd Combat Engineer Battalion "B" company. When finished training, he was shipped from New York to England, then France, before landing on Omaha Beach on the 14th of June, 1944. At 21 years old, he suffered a knee injury in Nance, France while repairing roads vital to the war. Dwight was sent to Naples, Italy for recuperation. Stateside, he went to Camp Dribble, Texas and Fort Louis, Washington, before becoming a member of the Forest Rangers in Boise, Idaho fighting fires from Japanese incendiary balloon bombs. Afterwards, he was an MP in Los Angeles to prevent robberies of US sailors from ladies of ill repute. He fondly remembered the pecan pies celebrities donated to the military servicemen during WWII. He was given an honorable discharge at Camp Shelby, Mississippi for his service from 1942 to 1946. He attended trade school becoming employed by General Electric Memphis Lamp works from 1947 to 1988. He married Myrtle Louise Lindstrom on February 28th, 1947 and they had three children; Sally (1951), Martha (1952), and Janie (1954). He was a member of First Baptist Church, Memphis Tennessee for over 60 years, active in their Sunday School. He was an avid gardener who enjoyed raising plants and vegetables and giving them to nursing home residents in the Raleigh community. He spent his last year living at the Ave Maria Nursing Home in Bartlett, where he enjoyed making new friends. A funeral service will be held Thursday, January 9, 2020 at the Memorial Park Funeral Home beginning at 11:00 am, visitation before.

The family of Cecil Dwight Spearman created this Life Tributes page to make it easy to share your memories.

Send flowers to the Spearman family.