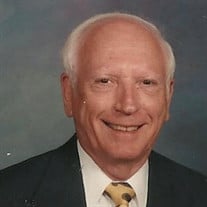 CECIL LONGINETTE HARRIS, born March 20, 1929, in Ruston, Louisiana to the late Cecil Grady and Blanche Phillips Harris, died Monday, November 29, 2021. Cecil grew up in Shreveport and attended Louisiana Tech University where he was president of his graduating class. He was a member of Lambda Chi Alpha social fraternity and Omicron Delta Kappa leadership fraternity. He was among the first Directors of The Louisiana Tech Foundation. His career employment was with Sears, Roebuck and Co, retiring in Memphis after 40 years’ service in several cities. He and his family moved to Memphis in 1960, where his last assignment was Controller/Manager of the Memphis Regional Accounting Center. In retirement, he used his accounting skills to assist clients, friends, and family with their tax return preparation. Cecil was a member of Mullins United Methodist Church for over 50 years, serving as Trustee, Treasurer, and a member of numerous committees. He played clarinet in the Mullins Church Ensemble. He received the Unsung Hero award from Mullins in 2010. An Eagle Scout, he enjoyed volunteer work in Scouting. In 1971 he received Scouting’s highest honor, the Silver Beaver Award. Other volunteer activities included serving on the Memphis Better Business Bureau Board and as a Memphis in May BBQ Contest Judge. He enjoyed swimming, fishing, golf, and growing prize-winning roses. An as avid fan of the LSU Tigers, he had succession of dogs which he named for LSU All-Americans. He is preceded in death by Barbara Ramsey, his college sweetheart and wife of 62 years. He is survived by his two sons, David J. Harris (Sallie) of Memphis and Mark P. Harris (Beth) of Lafayette. Grandchildren are Rebecca Harris of New York, William Harris of Memphis, Natalie Harris Angelle (Justin) of Lafayette, Mauree Harris Brooksher (Steven) of Baton Rouge, Andrew Harris (Emily) of Austin, and nine great grandchildren. He is also survived by his twin brother, Grady Louis Harris of Shreveport. Cecil will be entombed alongside Barbara in the Mausoleum at Memorial Park Funeral Home and Cemetery in Memphis. Services have been entrusted to Memorial Park Funeral Home and Cemetery, where a visitation will be held on the morning of Monday, December 6, 2021, from 10:00-11:00, with a memorial service to follow at 11:00. Memorial donations may be made to Mullins United Methodist Church in Memphis, TN. To view the online memorial tribute video. Click the link below to view. https://www.tributeslides.com/tributes/show/T85HNDWQ7RXKSQ5D To view the webcasted funeral service. Click the link below. http://webcast.funeralvue.com/events/viewer/64630

The family of Cecil L. Harris created this Life Tributes page to make it easy to share your memories.