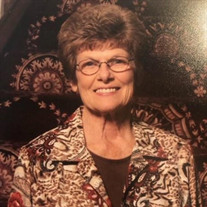 Mary Catherine Grossner, known to most as Catherine with a “C” and to her grandchildren as B-Bom, went to be with her Lord and Savior Jesus Christ on April 10, 2022, at the age of 86. Born on June 22, 1935, to William Cornell Henley Sr. and Margaret Barfield Henley in Memphis, TN Catherine was a graduate of Southside High School. Catherine was preceded in death by her son John Steven Grossner, her parents, her sisters Louise Henley Vance and Ellen Henley Salemi, her brothers, Bill, Bob, and Richard Henley, her great granddaughter Aimee Joy Huebner, and her son-in-law Terry McClure. She is survived by her brother Charles Henley, her children Fred Grossner (Tammy) of Patton, MO and Kay McClure of Collierville, TN as well as her six grandchildren and ten great-grandchildren. Catherine retired from the Shelby County school system after 50 years of service in transportation as a driver for school buses and special education vans, an assistant in special education classrooms, and eventually routing busses in the transportation department. She had many hobbies which included softball, tennis, fishing, golf, yardwork, and pickleball. She continued playing and winning pickleball until a few years ago and was continuing to do light yardwork until last year. She was also a devoted member of Broadway Baptist Church and, more recently, Collierville First Baptist. In her final weeks Catherine was very focused on meeting her Lord and what heaven would be like. She spoke of meeting friends and family who have passed before her and wanted to make sure we would all meet her there one day. The family will receive relatives and friends on Saturday, April 16 at 10:00 a.m. with a funeral service to follow at 11:00 a.m. all in the Fireside Chapel of Memorial Park Funeral Home. Interment to follow at Memorial Park Cemetery. Donation appreciated to Brain Tumor Society and Calvary Rescue Mission. To view the service online, please click on the link below: http://webcast.funeralvue.com/events/viewer/72350/hash:FEC1CEEEE2EB1AF3 Memorial Park funeral Home and Cemetery, 5668 Poplar Ave, Memphis, TN, 38119. (901) 767-8930.

The family of Catherine Grossner created this Life Tributes page to make it easy to share your memories.

Mary Catherine Grossner, known to most as Catherine with a “C”...

Send flowers to the Grossner family.