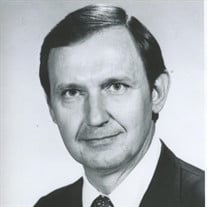 On Thursday, October 15th, 2020, Carroll Grant Brunthaver Jr., loving husband and father of two children, passed away at the age of 88. Carroll was born on March 27th, 1932 on a farm in Freemont, Ohio, to his parents, Carroll Sr. and Hazel Brunthaver. As a young man, Carroll served in the Us Air Force as a fighter pilot. On August 8th, 1953, he married Betty Jean Hessick. Together they raised a daughter, Susan, and a son, Jeff. Carroll earned his Ph.D. in Agricultural Economics from Ohio State University, and he went on to become a Research Economist at Cook Industries in Memphis. He then served as the Assistant Secretary of Agriculture for Domestic and Foreign Affairs, under the Nixon Administration in Washington, D.C. During his successful tenure in government, he was the lead US agricultural negotiator of two US/USSR agricultural agreements. Although controversial at the time, the agreements opened up an era of grain trade with the USSR. Additionally, Carroll served as President of the Commodity Credit Corporation and Chairman of the Federal Crop Insurance Corporation. Carroll and his family later moved back to Memphis, where he became the co-founder and CEO of Sparks Commodities Research Firm (currently known as Informa). In the most recent part of his career, Carroll managed individual commodity trading funds with McVean Trading and Investments in Memphis, where he continued to work through his 88th year of life. He truly loved his work, and his successful career is evident of that. In his free time, Carroll was an outdoorsman. He had a passion for fishing, hunting, and wood working. He was an avid reader, and he also loved to travel. Two of his favorite places to visit with his family were Beaver Creek, Colorado and the Florida Gulf Coast. Carroll was also known for his love of dogs, and he was the own of several beloved beagles throughout his life. Co-workers, friends, and family will remember Carroll for his ambition, sharp mind, generosity, and warm-heartedness. Carroll was preceded in death by his parents, Carroll Brunthaver Sr. and Hazel Brunthaver. Carroll is survived by his wife, Betty; his daughters, Susan (Mike); his son Jeff (Patty); his four grandsons: Aaron (Heather), Ryan (Carrie), Kyle (Diana), and Tyler; and his four great-grandchildren (Rowan, Camille, Ruby, and Betsy). A private family service is being held the week of October 19th, 2020. In lieu of flowers, please consider a donation to a charity of your choice.

On Thursday, October 15th, 2020, Carroll Grant Brunthaver Jr., loving husband and father of two children, passed away at the age of 88. Carroll was born on March 27th, 1932 on a farm in Freemont, Ohio, to his parents, Carroll Sr. and Hazel Brunthaver.... View Obituary & Service Information