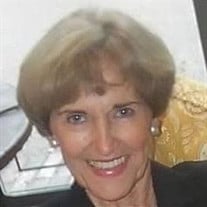 Heaven welcomed a very special lady on January 8, 2020 following a courageous battle with cancer. Carole Jane was born in Jackson, TN on February 6, 1937. Her family will receive visitors on Saturday, January 11 from 12:00 to 1:00 in the Parlor at Christ Methodist Church, followed by the funeral services at 1:00 in Wilson Chapel. Carole Jane graduated from Jackson High School where she was a cheerleader and homecoming queen and an outstanding basketball and tennis player. Carole Jane attended the University of Tennessee, Knoxville, where she was a member of Delta Delta Delta sorority. After graduating she taught at an elementary school in Memphis and then Holly Springs, MS while her husband attended law school. On June 19, 1961 she married Louis F. Allen. The union lasted 58 wonderful years. Carole Jane and Louis were members at Christ Methodist Church and “CJ” devoted her life to raising two children, a daughter, Elizabeth and a son, Bo (Elizabeth). She doted on her three grandsons, Louis, James and Griffin Allen. She is also survived by her niece, Robyn Hassell. She had many friends and was intensely loyal to those ladies from high school and college, most of whom were dubbed “The Madamas.” She also cherished her tennis friends and continued to play tennis until this fall. CJ was a devoted supporter of UT football and basketball and was affectionately called an “Orange Drop” as one of the most loyal followers of UT sports. She loved spending time in Destin and at the family’s second home on Pickwick Lake. She was an avid fisherman and loved golden retrievers. Carole Jane was preceded in death by her parents, Glenn and Maurine Hassell, and brother, Glenn Hassell, Jr. In lieu of flowers, the family requests donations be made to Christ United Methodist Church at 4488 Poplar Ave. Memphis , TN 38117 or Memphis Area Golden Retriever Rescue at P.O. Box 383122, Germantown, TN 38183 or a charity of the donor’s choice.

Heaven welcomed a very special lady on January 8, 2020 following a courageous battle with cancer. Carole Jane was born in Jackson, TN on February 6, 1937. Her family will receive visitors on Saturday, January 11 from 12:00 to 1:00 in the Parlor... View Obituary & Service Information

The family of Carole Jane "C.J." Hassell Allen created this Life Tributes page to make it easy to share your memories.

Send flowers to the Allen family.