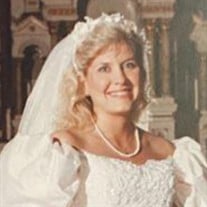 On Sunday, August 8th 2021, Carol Diane Withers left this earth and entered into the gates of Heaven. At the age of 62, Carol left behind her husband, John, four children, Grant, Alexis, Julia, and Reid and her two pawfect puppies, O’Malley and Murphy. Carol was born June 1st 1959 to James Gleeson and Patricia Garner in Kansas City. She graduated from Kansas State University in 1981 with a BS in Early Childhood Development. Carol was working at Associated Sales when she met John Withers; they later married on May 19th 1990. In 1994, they welcomed their first baby boy into the world, shortly after came their first daughter, and finally their twin son and daughter. Carol and her family moved to Memphis in 2002 where they raised their four kids and joined Church of the Incarnation. Carol began working at and later purchased the Three Dog Bakery with her husband, John. She sometimes confused her kids names with the dogs names because her love for her four legged friends was unmatched. Carol was a true saint; she was a loving wife, an amazing mother, a loyal friend, and a strong business women. Her work ethic was unparalleled and she was determined to instill that in all of her children, not through her words, but through action. Carol’s involvement in her children’s lives was very apparent. She served her community as Box Top CEO, soccer team manager, Team Collierville and Houston’s loudest cheerleader, and as her kids personal chauffeur. Carol was preceded in death by her father, James. She is survived by her husband, John, four children, Grant, Alexis, Julia, Reid, mother, Patricia, step mother, Judy, brother, Micheal (Erin) and aunt, Janet (Doyle). A memorial service to celebrate Carol’s life will be held on August 14th at Memorial Park Funeral Home. The visitation will take place from 11:30-1:00 with service to follow. Her family requests guests wear pink, blue or bright colors to celebrate her happy life. In lieu of flowers, please consider making contributions to the below GoFundMe to support Carol’s recent medical expenses and the twins college fund. https://www.gofundme.com/f/funeral-medical-expenses-for-carol-withers?utm_campaign=p_cf+share-flow-1&utm_medium=copy_link&utm_source=customer To view the service online, please click the link below: http://webcast.funeralvue.com/events/viewer/58464/hash:E71AD46EF5C30DB7

On Sunday, August 8th 2021, Carol Diane Withers left this earth and entered into the gates of Heaven. At the age of 62, Carol left behind her husband, John, four children, Grant, Alexis, Julia, and Reid and her two pawfect puppies, O&#8217;Malley... View Obituary & Service Information

The family of Carol Diane Withers created this Life Tributes page to make it easy to share your memories.

Send flowers to the Withers family.