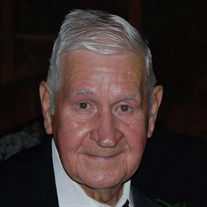 Carl Frederick Olson Streebeck, Jr., beloved husband, father, grandfather, great grandfather, friend and veteran of World War II, passed away peacefully on February 16, 2021, at Baptist Memorial Hospital in Memphis, Tennessee, at the age of 95. Carl was born on February 18, 1925, in Memphis, Tennessee, to Carl Frederick Olson Streebeck, Sr., and Jewel Dearman Streebeck. While growing up in downtown Memphis during the Great Depression, Carl learned to work hard and to find joy and humor in the simple things. Carl graduated from Memphis Technical High School, where he was in the Army Reserve Officers’ Training Corps. In 1943, at age 18, Carl was inducted into the United States Army. He served with the 568th Anti-Aircraft Artillery Battalion in the European theater of World War II and fought in the Rhineland Campaign. Carl’s tour of duty included England, France, Belgium, Germany, Holland, and Luxembourg. He also served as a corporal in the 904th Air Engineer Squadron and was honorably discharged in 1946. Carl met Elizabeth “Betty” Coon Streebeck, his best friend and wife of 69 years, on a blind date at the Skyway Ballroom of the Peabody Hotel in Memphis. Carl and Betty were engaged six days later and married on April 29, 1950 at Valley Presbyterian Church in Betty’s hometown of Imperial, Pennsylvania. They raised three daughters in a loving home and enjoyed traveling together to see the world. More than anything else, Carl and Betty loved spending time with their family. Carl worked for 34 years at American Airlines, and after retiring in 1987, he was active in the American Airlines Vanguard Association. He was a devoted member of First Baptist Church, Fisherville, where he was active in his Sunday school class and the senior adults’ ministry. Carl lived his faith in his every day life. Carl will be remembered for his generosity, wonderful sense of humor and stories about his childhood and military service. Carl embodied the ideals of the Greatest Generation with his bravery, selflessness, integrity, perseverance and devotion to his faith, his family, and his country. He worked hard to make life better for future generations, and he knew what was truly important in life. Carl will be lovingly remembered by his children Margie Barnett, Amy Abernathy (Taylor Abernathy), and Linda Streebeck (Brian Hoogesteger); grandchildren Beverly Rainey, Stephanie Barnett, Max Barnett, Lauren Abernathy (Darragh Farrell), and Emily Marino (Thomas Marino); and great-grandson John Marino. Carl also leaves his many dearly loved nieces and nephews, including his eldest niece, Delores Jean Nowell, who was like a sister to him. His family wishes to thank Brenda Roberts, who cared for Carl with such loving kindness. Carl was preceded in death by his beloved wife, Elizabeth “Betty” Streebeck, and his sisters Geraldine Hollowell, Dorothy Askins and Mary Thompson. Carl will be buried at Memorial Park Cemetery in Memphis, Tennessee, on March 8, 2021, following a private family ceremony. A memorial service and a celebration of his life will be held with family and friends at a later date. If you would like to send a memorial, please send it to First Baptist Church, Fisherville at 11893 Macon Rd., Eads, TN 38028 or to the charity of the donor’s choice.

The family of Carl Frederick Olson Streebeck created this Life Tributes page to make it easy to share your memories.

Send flowers to the Streebeck family.