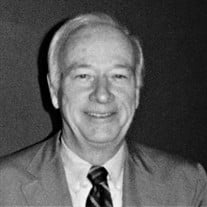 Judge Buford E. "Boochie" Wells, 93, passed away peacefully October 14, 2020, in Memphis, Tennessee. A private family funeral mass will be held October 19, 2020, at Church of the Holy Spirit in Memphis and interment will follow at Memorial Park Cemetery. Buford was born September 21, 1927, in Memphis, to Buford Ellsworth Wells, Sr. and Edna McSweeney Wells. He is survived by his wife, Joy Graham Wells, whom he wed January 26, 1951, at St. Patrick Catholic Church in New Orleans. He is also survived by five children, Buford Graham Wells, Brian David Wells, Jeffrey Paul Wells, Jennifer Wells Neeld (Jim) and John Joseph Wells (Kara). Buford was blessed with nine grandchildren including David Patrick Wells (Mindy), Daniel Bryan Wells (Tamara), Jason Paul Wells (Ashley), Allison Joy Wells, James Harvey Neeld, V, Christopher Wells Neeld (Laken), Graham Seward Neeld, Sean Patrick Wells and Christopher Joseph Wells, as well as eight great grandchildren. Buford graduated from Christian Brothers High School in 1945 and was inducted into its Alumni Hall of Fame. He attended the University of Mississippi where received his B.A. in psychology in 1949 and was a member of Kappa Sigma fraternity. A member of the school boxing team, he participated in the 1946 Midsouth Golden Gloves Boxing Tournament. Upon graduation he attended the University of Mississippi School of Law and received his J.D. degree in 1952. Buford and Joy settled in Memphis, where he pursued a private law practice until his election to the bench as a judge of the General Sessions Court of Shelby County from 1968 until his retirement in 1990. He served as President of the General Sessions Judges Conference and served on the Tennessee Court of the Judiciary for many years. A lifelong avid Ole Miss Rebel football team fan, he also enjoyed spending time with his family and tending to livestock at his farm in Somerville, Tennessee. He and Joy were also very active in parish activities and service at Church of the Holy Spirit. An accomplished drummer, Boochie played with local dance bands during summers and breaks while in high school. While in college he was a member of the Ole Miss dance band, the Mississippians, and later while in law school, the Rebelaires. He continued to play with numerous big bands around the mid-south region following graduation. In his later years, he continued drumming with the Steamboat Strummers which performed at hospitals, nursing homes, churches and private functions around Memphis. The family would like to thank Dr. Robert Kraus, Sadie Johns and Kelly Harris for their kind care for Buford, and neighbors Ray and Sue Brakebill for helping in so many ways. Memorials may be sent to Haiti Medical Missions of Memphis c/o Church of the Holy Spirit, 2300 Hickory Crest Dr., Memphis, TN 38119 or the Poor Clares of Memphis, St. Clare Monastery, 1310 Dellwood Ave., Memphis, TN 38127.

Judge Buford E. "Boochie" Wells, 93, passed away peacefully October 14, 2020, in Memphis, Tennessee. A private family funeral mass will be held October 19, 2020, at Church of the Holy Spirit in Memphis and interment will follow at Memorial Park... View Obituary & Service Information