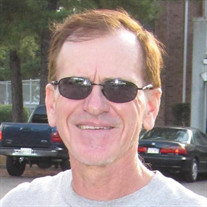 Bruce Arthur Canfield (72), of Collierville, Tennessee, passed away peacefully on August 14th, 2021 at Methodist Hospice House after fighting a brave battle with cancer. Bruce is survived by his beloved wife of 47 years, Cynthia Canfield; aunt Velda Morton of Medina, OH, brother Darryl (Claudia) of Brimfield, OH, daughter, Catherine Chalmers (Andy) of Plymouth, MA; son Andrew Canfield (Mun Young) of Collierville, TN; daughter Sandra Canfield of Collierville, TN; daughter Caroline “Carrie” Canfield Blackwell (Jeff) of Bartlett, TN; nephew David Canfield of Mogadore, OH; and four loving grandchildren: Jacob Kenney, Caitlin Kenney, Mackenzie Chalmers, and Sydney Breish; as well as many loving friends. Bruce is preceded in death by; his parents, Charles and Elizabeth Canfield, infant daughter Pauline Elizabeth Canfield, nephew Douglas Canfield, and uncle Don Morton. Born October 30th, 1948 in Medina, Ohio, son of Charles E. Canfield and Elizabeth Canfield, Bruce always had his eyes on the sky. Enchanted with a lifelong love of flying, he entered the United States Air Force at the young age of 22 after graduating from the Ohio State University, serving from 1970-1975 through the Vietnam war as First Officer on the B-52 Bomber. While stationed at Grand Forks AFB in North Dakota, Bruce met Cyndy Dodge, a fellow Officer in the Air Force and they were married on March 23rd, 1974. In 1975, Bruce was honorably discharged from the Air Force but that was not the end of his travels. Bruce and Cyndy moved to Memphis, TN so that Bruce could fly planes for Federal Express (as it was then known). They moved to Colliervile, TN in 1977 to raise their growing family. Planes weren’t the only vehicle he was passionate about. His love of cars and tractors were apparent in all aspects of his life. He was a proud lifelong Ford owner. HIs pride and joy was his 1970 Boss 302 Mustang. He would only drive it up and down the street, not even to the gas station. When he wasn’t driving his Fords, he would be in the yard on one of his tractors. He loved to mow his yard and tend to his garden. An avid runner, Bruce would run every day, in every kind of weather, wherever he was. Bruce started working at FedEx in 1975, working his way through the company, becoming a pilot in 1977. He flew many types of planes throughout the years. He has been the captain of the B-727 and Airbus 320, to name a few. He retired in 2004, after 29 years of service. An avid amateur meteorologist, he would take the children to talk to the meteorologists at FedEx and teach them about weather patterns. He enjoyed running his model trains around the layout that he designed and built. He would always point out which engines were pulling the many trains that ran through Collierville. Bruce was a man of strong faith and was a founding member of Faith Lutheran Church in Collierville, TN. In addition to serving as Elder, Bruce also served on the Preschool Advisory board. Memorial Park Funeral Home, Memphis, TN, will be handling services for Mr. Canfield. Services will be held on Tuesday, August 24th at Faith Lutheran Church in Collierville, TN. Visitation will be from 2:00pm- 4:00pm. The funeral service will be at 4:30pm, with a reception to follow. Burial will take place on Wednesday, August 25th at 10:00am. He will be buried at the West Tennessee Veterans Cemetery in Germantown, TN. The family would like to express their deepest thanks to the many workers at Methodist Hospice House for their compassionate care and love. In lieu of flowers, donations can be made to the Preschool Scholarship Fund at Faith Lutheran Church.

The family of Bruce A. Canfield created this Life Tributes page to make it easy to share your memories.

Send flowers to the Canfield family.