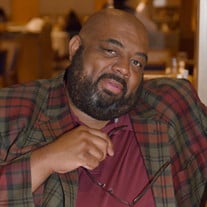 Our hearts are heavy as we announce the passing of Officer Bobby Rodriguez Montgomery on August 16, 2020 at Methodist University Hospital in Memphis Tennessee at age 45. Officer Montgomery was born in Memphis Tennessee on August 14, 1975 to his parents, the late Morris Bobby Abston and Bettie Nelson. He attended Southside High School. He was a member of the Austin Peay State University’s football team where he played defensive end. He graduated from Austin Peay with a Bachelors in Business Finance in 1997. Officer Montgomery joined the Memphis Police Department in 2003 where he patrolled the Binghampton, Orange Mound, Douglas and Tillman communities. He confessed his life to Christ at an early age and rededicated his life to Christ under the guidance and leadership of Pastor Darius Oliver, Sr. Officer Montgomery was united in marriage to Carnashun. When not in uniform, Officer Montgomery volunteered his time coaching youth football and helping those in the communities he served. He was also a member of the Badville Racing Motorcycle Club which sponsored many community outreach programs. He owned Shields Montgomery Travel Agency where he enjoyed traveling and blogging about his many adventures. Officer Montgomery is survived by his wife, Carnashun; his son, Marqus, his daughters, Madison and Maya; his mother, Bettie Nelson; his siblings, Mariam Montgomery, Yolanda (Calandra) Whitehead, Morris (JoAnn) Montgomery, Lajuana Brown, Shenequar (Thaddeus) Johnson, Marlon Montgomery and Andre (Sherika) Montgomery, a host of aunts, uncles, nieces, nephews, cousins, god-children and friends. The family will receive friends from 4-7 pm Tuesday, August 25 and his funeral service will be held at 11 am Wednesday, August 26 both at Oak Grove Missionary Baptist Church, 7289 Highway 64, Memphis, TN 38133. Interment with honors will follow at Memorial Park Cemetery. His service arrangements have been entrusted to Memorial Park Funeral Home and Cemetery, 5668 Poplar Ave, Memphis TN 38119, 901-767-8930. "A Fitting Farewell for Everyone"

The family of Bobby Rodriguez Montgomery created this Life Tributes page to make it easy to share your memories.

Our hearts are heavy as we announce the passing of Officer Bobby...

Send flowers to the Montgomery family.