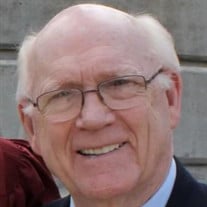 Billy F. Dutton, Sr., 84, of Franklin, TN, passed away on January 26, 2021 in Nashville, TN. He was born on April 1, 1936 in Ravenden, AR to Ruby F. and Elizabeth (McCarver) Dutton. He was preceded in death by his parents, two sisters, Catherine Swaim & Betty Davidson, one brother, Perry Mac Dutton, and a grandson, David F. Dutton. He is survived by his wife, Rhoda Jean (Presley) Dutton, a son, Billy F. Dutton, Jr., a daughter-in-law, Mary Martha (Luna) Dutton, and one grandson, James F. Dutton, all of Franklin, TN. “Bill” grew up in Batesville, AR where he started working early as a newspaper carrier for the Batesville Guard Newspaper. He graduated from Batesville High School in 1954 and received an Honorable Discharge from The National Guard of Arkansas in 1956. He married Rhoda Jean Presley of Desha, AR in 1956. They had their only child, Billy Jr., in 1957. Bill operated a Plumbing and Electrical business in Batesville until he graduated from Arkansas College in 1971 with a degree in Economics. At that time, he began a new career as an accountant. He became a Certified Public Accountant (CPA) and worked in Bentonville, AR, Greenville, MS, and Memphis, TN. Most of his career was spent in Memphis where he worked from 1979 until he retired from Auto-Chlor Systems in 1998 after working there 17 years. After retiring, Bill realized that he loved practicing accounting too much to stop. He started his own CPA firm in Collierville, TN and continued to serve clients there and in Franklin, TN after moving there in 2009. He continued working into his early 80’s. Bill was a member of the Church of Christ for all his adult life. In Batesville, he was a member and deacon of the Central Avenue Church of Christ and in Greenville he served as an elder of the South Main Church of Christ. In the Memphis area, he was a member of Wooddale and Collierville Churches of Christ and in the Nashville area, a member of the Concord Road Church of Christ. He served on the boards of several charitable organizations through the years, using his financial expertise and sound judgment for the benefit of the community. Bill enjoyed going to and performing in live music shows around the Memphis and Franklin areas. He played the harmonica, dulcimer, and guitar and was a member of several small musical groups who performed for many associations and events. Bill grew up when Saturday Matinees were popular and was a big fan of western movies. He could tell you the name of just about every cowboy in any B-Western movie ever made. He could also perfectly imitate the sound of a freight train whistle which entertained many children. He will be missed most by his family. Dad was a devoted husband, father, and grandfather. He always put what we needed before anything else, offered wise advice, and made us happy anytime we were around him. He was a perfect example of being kind to everyone and always had either a silly joke or a secret handshake to make you laugh. He will be missed by many. A visitation will be held Sunday, January 31st at 12:00PM with a graveside service to follow at 1:00PM, all at Memorial Park Funeral Home and Cemetery, 5668 Poplar Ave., Memphis, TN, 38119. 901-767-8930

Billy F. Dutton, Sr., 84, of Franklin, TN, passed away on January 26, 2021 in Nashville, TN. He was born on April 1, 1936 in Ravenden, AR to Ruby F. and Elizabeth (McCarver) Dutton. He was preceded in death by his parents, two sisters, Catherine... View Obituary & Service Information

The family of Billy F Dutton Sr. created this Life Tributes page to make it easy to share your memories.

Send flowers to the Dutton family.