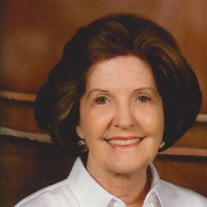 Bettyann Abney Baker, of West Memphis, AR died on January 8, 2022. She was born on November 2, 1935, to Robert and Ruby Abney of Memphis, TN. Bettyann was the wife of the late James F. Baker of West Memphis, AR. She attended Columbia College (formerly Columbia College for Women) in Columbia, Missouri, and graduated from Memphis State University, where she was a member of Phi Mu sorority. Bettyann was a member in the West Memphis Junior Auxiliary. She was a member of First Baptist Church in West Memphis. She faithfully served at the Welcome Center, AWANAS, and was appointed to the Pastor Search Committee. She was active in Bible Study Fellowship for many years in Memphis, TN. She was instrumental in bringing Bible Study Fellowship to West Memphis and was the first Teaching Leader of the local women’s group there. She loved to play cards with her Bridge Club and valued their friendships very much. You would often find her gathered around her kitchen table with friends. Her annual beach trips with her children and grandchildren were something she looked forward to every year. One of her special joys was spending time with her grandchildren. For many years she drove them back and forth across the bridge to school. They shared special times together in the car that her grandchildren will never forget-Her love for Elvis music, Target runs, and a daily McDonald’s drive thru. She is preceded in death by her late husband, James F. Baker, daughters Lee Ann Baker and Suzanne Baker Warren. She is survived by her children, Diane Baker Britton(Blann) of Crawfordsville AR. and Elizabeth Baker Bell(Mark) of Marion, AR; her eight grandchildren, Beau Britton(Lauren), Diana Clair Hey(Brian), Trip Hale(Sara), Baker Mattingly, Elaine Hale, Daniel Britton, Townsend Warren, and Jane Ellen Bell; her two great-grandchildren Britton Hey and Briggs Britton. The visitation will be held starting at 12:00 p.m., until the service time at 1:00 p.m. Thursday, January 13, 2022 at First Baptist Church, 200 North Missouri St., West Memphis AR 72301. In lieu of flowers, the family requests memorial gifts be made to the First Baptist Church 200 North Missouri Street West Memphis, AR 72301.

Bettyann Abney Baker, of West Memphis, AR died on January 8, 2022. She was born on November 2, 1935, to Robert and Ruby Abney of Memphis, TN. Bettyann was the wife of the late James F. Baker of West Memphis, AR. She attended Columbia College... View Obituary & Service Information

The family of Bettyann A. Baker created this Life Tributes page to make it easy to share your memories.

Send flowers to the Baker family.