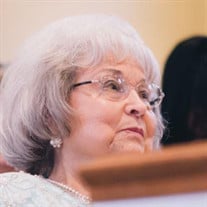 Betty Ann Roberson Clifton, 89, died on February 6, 2021. Betty was preceded in death by her husband of 58 years Johnson S. Clifton, daughter-in-law Louise Clifton, brothers James Roberson (Earline Roberson) and William Roberson (Henry Easterwood). Born in Ripley, MS, Betty was one of three children; she was the only daughter of William Ralph and Letha Linville Roberson. She learned early to do whatever others needed her to do, and her clear gift was nurturing her family which she did until she died. Betty spent much of her life in Memphis, TN, where she married Johnson Clifton in 1950 and began raising her children. Later the family moved to Jonesboro, Arkansas where she created deep roots for the family. Everywhere she lived, Betty was a member of a Baptist church. When Johnson became ill, Betty moved again and lived the last fifteen years of her life in Nashville. Even in her late 70s, she found new ways to support her children and grandsons and never missed a holiday celebration or the opportunity to bring food, especially her famous green and red gelatin salad. Betty held various work positions but she found her professional calling in being the administrative assistant for the Arkansas Craighead County Judge’s office. Her love of helping others, having fun, traveling and affecting change came together in that role. Betty thrived on all things beautiful, especially her younger brother’s art, flowers, and well-made clothes (her mother was a seamstress). The beauty she loved reflected her beauty within. Loving mother of Stewart, Robbie Pinter (Mike), grandmother to Jeffrey Clifton (Elisabeth Bradner), Phillip Clifton (Laura Elizabeth), and Nicholas Pinter and great grandmother to Hank Clifton and Walter Clifton. A visitation will be held on Saturday, February 27 at 12:00 pm with a graveside service following at 1:00 pm all at Memorial Park Funeral and Cemetery, 5668 Poplar Ave, Memphis, TN, 38119. The family would like to thank Alive Hospice Nashville for easing her pain, and The St. Paul, where Mom nurtured and was nutured. A celebration of her life later to be held at Glendale Baptist Church in Nashville, TN. In lieu of flowers, donations may be made to Glendale, Best Buddies Nashville or a charity of your choice

The family of Betty Ann Roberson Clifton created this Life Tributes page to make it easy to share your memories.

Send flowers to the Clifton family.