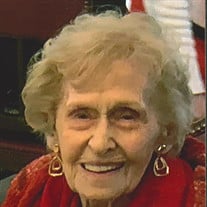 Betty Barlow Agee, 93, passed away August 4, 2020 with her two sons- Whit and Mike- by her side. She was born July 26, 1927 in Shiloh, TN to Lawrence Howard Barlow and Jewel Hodge Barlow. She was predeceased by her husband of 52 years, Grady Agee, and her younger brother, Dr. Joe Barlow, who practiced dentistry in Iuka, MS. She grew up in Shiloh where she first encountered the man who she would marry some 20 years later. She recalled later how Grady and his older buddies thought it was fun to vandalize the sand box she had worked hard to perfect. It didn't give her a good first impression. Her favorite childhood memories involved exploring the Shiloh battlefield with her father looking for souvenirs. Later after the Park Service purchased their home, the Barlow family moved to Counce on land on the south side of Highway 57 across from Little Andy's and the Broken Spoke. Her parents operated a general store and rented cabins to out of town visitors. She rolled up her sleeves and did her share of everything from pumping gas to cleaning the cabins out on a daily basis. She graduated from Corinth High School in 1945 and Mississippi State College for Women in 1950 with a degree in home economics. After one year of teaching home economics at West Point High School, she defied her father, caught a ride to Memphis and flew to Dallas/Ft. Worth to attend American Airlines Stewardess School. She started her flight attendant career in 1952 and was stationed in Chicago, Dallas and Detroit proudly being the Skipper in Charge of the Admirals Club in Detroit and later Dallas. It was in Chicago she met Hugh Hefner and Arnie Morton (Morton's Steakhouse) as they drew up plans for future Playboy Clubs. However, she refused to dance with Hefner when asked. Flight attendants were not allowed to be married so in early 1959 after a whirlwind courtship aided by Ben and Nancy Wood and an exchange of almost 100 letters between them (which each kept hidden until death), Miss Barlow quit her job. They were the first couple married at the chapel at Second Presbyterian by Dr. Henry E Russell in April 1959 and honeymooned in one of her favorite cities- San Francisco. In addition to raising two sons, she was active in charitable and civic organizations serving as an officer in the Memphis Bar Auxiliary, the Duration Club and the Maternal Welfare League. She thoroughly enjoyed the fun and fellowship of former American Airlines fight attendants in the Kiwi Club of Memphis. Her greatest joy was attending every high school cross country meet, basketball and baseball game of her two sons. She would later work part time for American Airlines which enabled her to take the family on numerous vacations to Great Britain, Canada, Mexico, Hawaii, New Zealand, Fiji, several Caribbean islands, California and the Pacific Northwest, New York and New England. It was on these vacations that the Agee men would dutifully go shopping with her despite the calling of nearby golf courses. In her later years, she operated booths at various antique malls including Robert E Lee, Market Central and Sheffield's under the Hollyhock name. In addition to her two sons, she is survived by her daughters in law, Penny Choate Agee and Amy Agee, and six grandchildren- Lindsey, Kendall and Zach all of Chattanooga and Ryan, Marianne and Sam all of Germantown. She is also survived by her sister in law- Jean Barlow of Iuka, MS, two nieces- Rachel Barlow Adelman of Austin, TX and Diana Barlow Cosby of Tupelo, MS- and two nephews- John and Jim Agee. There will be a graveside service for friends and family Friday August 7th at 11:00 at Memorial Park Cemetery. In lieu of flowers, donations may be made to Forever Young Veterans 185 S. Center St. Suite 110 Collierville, TN 38017, Baptist Trinity Hospice, Second Presbyterian or a charity of the donor's choice.

Betty Barlow Agee, 93, passed away August 4, 2020 with her two sons- Whit and Mike- by her side. She was born July 26, 1927 in Shiloh, TN to Lawrence Howard Barlow and Jewel Hodge Barlow. She was predeceased by her husband of 52 years, Grady... View Obituary & Service Information

The family of Betty Barlow Agee created this Life Tributes page to make it easy to share your memories.

Send flowers to the Agee family.