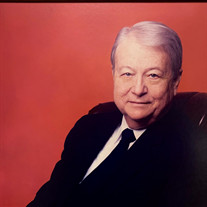 Bernard ‘Barney’ Allen died October 16, 2021 at Baptist Memorial Hospital, at the age of 96. He was born January 11, 1925 in DeValls Bluff, Arkansas to William I. and Lula M. Sparks Streat. He is survived by his loving wife of 36 years, Judith Drew Street; Sons Allen Street of Houston, TX and Lee Street and wife Tracie of Bartlett, TN; Grandchildren Heidi and Nathan Street; Cousin; Jim Sparks of Little Rock, AR.and several nieces and nephews. He is preceded in death by Sisters Shirley Streat, Maxine Streat Blaylock, Brother-in-Law Robert Blaylock, and Brother Jon “Bear” Streat. Barney was an Eagle Scout. He was also a WWII US Navy veteran serving 1942 – 1945 as a signalman in both the Atlantic, and Pacific theaters. He graduated from Memphis State College (now University of Memphis) in 1949, and remained a loyal Tigers fan his entire life. Post graduation from the college, Barney held Accounting, Auditing, and Controller positions with CPA groups, and various public and private companies in the Memphis area. In 1982 he co-founded Good Advertising, Inc., serving as Executive Vice President and Treasurer, until his recent illness. Barney loved his family, outside and landscape photography, domestic and international travel, fishing, hunting, and golf, as a long time member of Windyke Country Club. He attended All Saints and Saint Georges Episcopal churches. He was a Mason and a Shriner He was also a member of the Scottish Rite, the American Legion, the Memphis Camera Club, and the National Rifle Association (NRA). He always told us “When an old person dies, a library burns”, and Saturday evening, a library completely full of knowledge and ideas – burned. In lieu of flowers memorial contributions may be made to St. Jude children’s research Hospital and/or The Alzheimer’s Association.

The family of Bernard "Barney" Allen Street created this Life Tributes page to make it easy to share your memories.

Send flowers to the Street family.