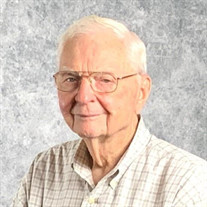 Benjamin T. Wages, 90, of Memphis, passed away on July 19, 2021. Mr. Wages was born on December 30, 1930 in Atlanta, Georgia to Benjamin T. Wages and Annie Taylor Wages. He received his Bachelor of Science degree at McMurry College in Abilene, Texas. He continued his education and received his law degree from Southern Methodist University where he met and married his wife, Carolyn. Mr. Wages was an Air Force Veteran having served during the Korean Conflict and served in the legal profession as a private practice attorney. He was preceded in death by his wife of 60 years Carolyn and his younger brother Jerry. Mr. Wages is survived by his sons, Benjamin T. Wages Jr and David (Virginia) Wages, and grandchildren Ashley, Nichole, David (Hannah) Jr., and Sarah as well as his two great-grandsons, Davey and Vines and a third grandchild pending. He was a faithful member of St Luke’s United Methodist Church for over 60 years serving his church in many areas. He was a longtime member of the Christian Homebuilders Class and served as head usher for the first service. His interests included photography, the Downtown Optimist Club, and Memphis Tiger Basketball. Some of his happiest memories were heading up the Wages Family Reunion held each August in Lawrenceville, Georgia where he spent time with “kinfolk”, as he affectionately called them. Family was very important to him. He was actively involved with his two sons from their days in boy scouts, being their backyard baseball coach, to being their lifelong moral support. ”Grandaddy” as he was known to his grandchildren was very supportive of all their activities. He enjoyed quizzing them on American history, our state capitals & reading them stories in his favorite blue chair. The family will receive relatives and friends on Monday, July 26 at 12:00 p.m. with a funeral service at 1:00 p.m. all in the Riverside Chapel of Memorial Park Funeral Home. Interment will follow at Memorial Park Cemetery. In lieu of customary remembrances, the family requests memorial contributions be made in Mr. Wages’ name to St. Luke’s United Methodist Church, Food Ministries Fund 480 South Highland, Memphis, Tennessee 38111. Memorial Park Funeral Home and Cemetery, 5668 Poplar Ave, Memphis, TN, 38119. (901) 767-8930.

Benjamin T. Wages, 90, of Memphis, passed away on July 19, 2021. Mr. Wages was born on December 30, 1930 in Atlanta, Georgia to Benjamin T. Wages and Annie Taylor Wages. He received his Bachelor of Science degree at McMurry College in Abilene,... View Obituary & Service Information

The family of Benjamin T. Wages created this Life Tributes page to make it easy to share your memories.

Send flowers to the Wages family.