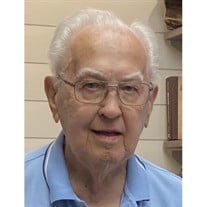 Bayless Guenther was born February 22, 1934 to Richard and Alice Guenther in Memphis, Tennessee. He was the 4th of their 5 children, all raised at 894 Sheridan. Bayless loved to share memories of growing up in Memphis and stories of so many friends from the neighborhood and school. He especially loved his early childhood summers at YMCA camp in Mammoth Springs. Bayless attended Snowden Elementary, Central High, a short stint at LSU, and eventually earned his degree at Centenary College in Shreveport, Louisiana. It was there that he fell in love with his future wife of 65 years, Delaine Bankston. Soon after they wed in 1955, the Army sent them both to Germany. The fond memories of living abroad lasted a lifetime. Bayless is preceded in death by his wife, Dee. He is survived by his three sons, John, Mark, and Stephen, 7 grandchildren, and 4 great grandchildren. Bayless was a longtime member of Independent Presbyterian Church, a member of the Scottish Rite, and a Shriner. A very talented businessman, Bayless and his brother Albert founded Allied Graphics in 1965 and remained a loyal servant to his company right till the end. He was quite proud to have employed a fair number of people for their entire career up to retirement. Bayless and Dee loved to travel, especially on cruise ships. After training his sons in the family business, he and Dee cruised the world many times each year. Returning to the small town in Germany and finding their old apartment was a highlight of their travels. On August 18, the Lord called Bayless home after a short illness. His mind never faded but his body grew weary. The family will receive relatives and friends on Sunday, August 29 from 1:00 pm until the time of the funeral service at 2:00 pm at Memorial Park Funeral Home and Cemetery, 5668 Poplar Avenue in Memphis. The committal service will immediately follow. All family and friends are welcome, please observe whatever mask mandate may be in place. In lieu of flowers, the family asks that any memorials be sent to St. Jude Children’s Hospital.

Bayless Guenther was born February 22, 1934 to Richard and Alice Guenther in Memphis, Tennessee. He was the 4th of their 5 children, all raised at 894 Sheridan. Bayless loved to share memories of growing up in Memphis and stories of so many... View Obituary & Service Information

Bayless Guenther was born February 22, 1934 to Richard and Alice...