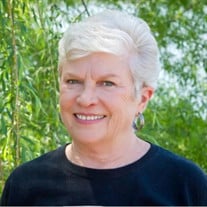 Barbara “Bobbie” Hill Evans, 77, of Memphis died at her home in the early morning of March 16th, 2020. She had succumbed Pulmonary Fibrosis. She was born October 3rd, 1942 to James Thomas Hill and Katherine Spires Hill. She is survived by her two sons; Jefferson Allen Evans and Russell Wayne Evans. Her Two sisters: Anita Sage and Nancy Glidewell. Three grandchildren: Dylan, Emily and Annabella. Her God Daughter: Star Cross and Four Nieces and two Nephews. Born in Memphis, Tennessee she graduated from Messick High School in 1960 where she was voted into the school Hall of Fame, acted in theater productions and was president of the AZT sorority. She graduated from the University of Memphis in 1964 with a BA in Counseling, soon after going to work for The Tennessee Department of Human Services. While married she quit working so she could raise her two children until 1973 when she returned to work for Human Services in their Child Abuse and Neglect. She worked for the unit for fives years until she felt the was “The hardest job in the world.” In 1978 she returned to the University of Memphis too earn her Master’s Degree in Guidance and Counseling and after graduating got a job with the Tennessee Department of Corrections where she soon became head Counselor at a local prison. It was a job she loved with a passion for being an advocate for the inmates and upholding their rights. In 1985 she was promoted to a Supervisory position with the Department of Probation that would later over see the state parole officers as well, with a focus on Investigational reports requested by City and State criminal courts and The Department of Corrections. In 2002 She retired to help with the care and upbringing of her Grandson and then later her own mother. Not long after the death of her mother she started doing volunteer at St. Jude, a dream she had had since the hospital had opened as well as doing volunteer work for MIFA. She loved life and people. Because of issues with the Coronavirus outbreak there will only be a private small gathering of family and friends. Memorial contributions may be made to St. Jude 262 Danny Thomas Pl, Memphis, TN 38105

Barbara &#8220;Bobbie&#8221; Hill Evans, 77, of Memphis died at her home in the early morning of March 16th, 2020. She had succumbed Pulmonary Fibrosis. She was born October 3rd, 1942 to James Thomas Hill and Katherine Spires Hill.... View Obituary & Service Information

The family of Barbara "Bobbie" Hill Evans created this Life Tributes page to make it easy to share your memories.