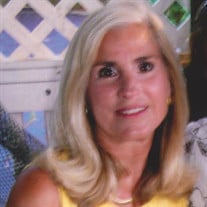 Babette Ehemann Lombardo died on May 3, 2021 after a five year hard fought battle with cancer. She was born on January 16, 1951 in Memphis, Tennessee to John Morris and Babette Emery Ehemann. She graduated from White Station High School and attended Tulane University. Babette was a champion three meter springboard diver. At age 17 in 1968, she won the Women's Junior National and AAU Diving Championship. She had won the Tennessee State Title for the previous five years. She qualified to dive in the 1968 US Olympic Trials. While pursuing her diving career at Tulane University, she met her future husband at the university swimming pool in the fall of 1970. Her husband, Frank, who was a member of the Tulane University Swimming Team, was in awe at how well she dived. He had never seen someone dive so well in person. By coincidence, after completing law school, he accepted a job in Memphis. Babette and Frank were married on August 9, 1975 at the Immaculate Conception Catholic Church. Babette loved to paint, sew and smock. She painted many paintings, which were in art shows. She was very talented with her hands and very patient, which are necessary qualities for an artist. She drew the emblem for the Church of the Holy Spirit Catholic Church. She also made the altar cloth for the Chapel at Holy Spirit Church. She was a lover of animals especially cats and birds. She is survived by her two pet cats, Curry and Nadia. Babette loved to travel having visited several countries in Europe, many national parks, Maine, Alaska, Canada and her favorite beach vacation, Cancun, Mexico. Babette was a very loving and considerate wife, mother and grandmother. She is survived by her husband, Frank, her son Frank L. Lombardo, III (Larry), his wife, Tracy, and their daughters, Sophia and Emilie of Memphis. She is also survived by her daughter, Babette A. Lombardo-Book, her husband, Rob, and their two sons, Robin and Lewis of Odense, Denmark. Babette was a little sister for the Sigma Nu Fraternity at Tulane University, a member of the Bartlett Art Association and Beau Arts. The family is very appreciative of the doctors at the West Cancer Center, especially, Dr. Daniel Vaena, MD Anderson Cancer Center in Houston, Texas and the Sarah Cannon Cancer Center in Nashville, Tennessee for all of their efforts in trying to prolong Babette's life, but in the end the power of God prevailed. Visitation will be held from 5:00 p.m. - 7:00 p.m., Monday, May 10, 2021 at Memorial Park Funeral Home and Cemetery. Her funeral mass will be held at 10:00 a.m., Tuesday, May 11, 2021 at Holy Spirit Catholic Church, 2300 Hickory Crest Dr., Memphis TN 38119. Entombment will be in Memorial Park Cemetery. In lieu of flowers, donations to the American Cancer Society or the Memphis Humane Society are appreciated. Click the link below to view the online tribute video. https://www.tributeslides.com/tributes/show/23J25MYF6SP87SHL

Babette Ehemann Lombardo died on May 3, 2021 after a five year hard fought battle with cancer. She was born on January 16, 1951 in Memphis, Tennessee to John Morris and Babette Emery Ehemann. She graduated from White Station High School and... View Obituary & Service Information

The family of Babette Ehemann Lombardo created this Life Tributes page to make it easy to share your memories.

Send flowers to the Lombardo family.