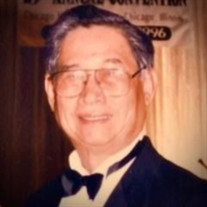 Dr. Avelino G. Reyes, M.D. age 95, of Memphis, Tennessee passed away on November 23, 2021 at St. Francis Hospital. Ave was born on November 10, 1926 in San Juan, Hagonoy Bulacan, Philippines to the late Guillermo and Inocencia Galang Reyes. He was a parishioner at St. Louis Catholic Church and St. Brigid Catholic Church. He graduated from the University of Santo Tomas College of Medicine in 1952 at the age of 26. He was given a rare opportunity to do his residency in the United States due to a shortage of medical doctors and he finished his surgical residency at Deaconess Hospital in Cincinnati, Ohio in the 1950's. He returned back to the Philippines to marry his first wife, Dr. Nora V. Reyes, M.D., psychiatrist (deceased) and began their family: Aileen, Andrew, and Alex; while working as a general practitioner in the mountain province. He returned once again to the U.S. and started working as a credentialed physician at Deaconess Hospital in Ohio and ultimately began his own private practice in general medicine. He then relocated to Memphis, Tennessee in the mid-1980's to work as a physician for the Shelby County Health Dept. clinics and the jail. He also worked as a medical director at the Memphis Health Center. In his final professional years, he worked for a home health agency where he was passionate in helping the elderly patients in their homes. He was an active member of the Fil-Am Association of Memphis holding various positions such as President, Board of Directors, and a recipient of the Presidential Service Award for Outstanding Dedication and Continued Service for the Organization on 12-8-07. He volunteered for medical mission to the Philippines for both Memphis Mission of Mercy and Memphis Outreach. After retirement, he became a resident of Kirby Pines Retirement LifeCare in their assisted living facility which he called home until his passing. He loved cooking, fine dining, wine tasting, traveling, ballroom dancing, was known to be quite a sharp dresser. Dr. Reyes was preceded in death by his parents, Guillermo and Inocencia Galang Reyes; his brother Guillermo G. Reyes, Jr. his sister Rose Gallardo, his son Alex Reyes, and son in law Randy Chrestman. He is survived by his wife of 29 years, Dr. Dinia Cruz-Reyes, M.D.; his children Aileen Chrestman, and Andrew Reyes of New York, NY (Jim Connolly); his stepsons: Andrew Cruz and Brian Cruz of San Francisco, CA (Mara); his grandchildren: Christopher Chrestman (Jessica), Cortnee Chrestman, James and Drew Connolly-Reyes of NY; his siblings: Librada Ignacio and Dr. Alberto G. Reyes, M.D. both of the Philippines; his stepmother Salome Reyes of the Philippines; his step siblings: Alfredo Reyes and Antonio Reyes (Alice) both of Winnipeg, Manitoba Canada, Angeline Manio of the Philippines, and Amy Decastro of Winston Salem, NC; along with numerous nieces and nephew worldwide. Visitation will be on December 3, 2021 from 5:00-7:00 p.m. Central Standard Time Zone at Memorial Park Funeral Home. A Mass of Christian burial will be on December 4, 2021 at 10:00 a.m. at St. Louis Catholic Church and entombment will follow at Memorial Park Mausoleum. The Mass will be livestreamed by going on the St. Louis Catholic Church website at stlouischurchmphs.org and click "watch Mass". Donations can be made to the Catholic Diocese of Memphis at 5825 Shelby Oaks Dr. Memphis, Tennessee 38134 or on their website at cdom.org in memory of Dr. Avelino G. Reyes, M.D. Well done good and faithful servant of the Lord! Welcome Home to the place where you belong.

The family of Dr. Avelino G. Reyes created this Life Tributes page to make it easy to share your memories.

Send flowers to the Reyes family.