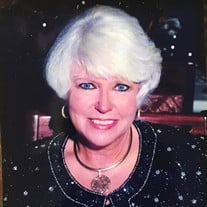 Anne Rogers Russell was born on April 5, 1948 and passed away after a brief battle with cancer on February 7, 2021. The only child of John and Marjorie Rogers, Anne grew up on Peabody Avenue and was a lifelong Memphian. She attended Idlewild Elementary, Bellevue Middle, and Central High School. During this time, she also graduated from the DeShazo School of Music, where she developed her love and talent for music. She studied organ at Southwestern (Rhodes) College, where she was a member of the Kappa Delta sorority. On August 31, 1968, Anne married Bill Russell, and they shared a 52-year-long loving marriage. Anne’s love of music defined her entire life. She served as organist at Lamar Heights Baptist Church, Cherry Road Baptist Church, and Kingsway Christian Church. She played with the Germantown Symphony, the Memphis Redbirds, the Sara Beth Causey Chorale, and the choir at Ridgeway High School. She could be heard from the pit playing for many musicals at Theatre Memphis, Playhouse on the Square, and numerous schools throughout the Memphis area. She also taught piano to hundreds of students both privately and in city schools. After she retired from teaching, Anne’s entrepreneurial spirit kicked in and she owned and operated Tinker Tunes and Balloons for 15 years. Anne loved traveling the world, entertaining friends, and mostly spending time with her family. She leaves behind her husband Bill, children Amy Russell Lindeman (Henry), Dr. Andy Russell (Nancy), Ashley Russell Fowler (Scott), and Dr. Tim Russell (Suzi). She also leaves nine grandchildren, Henry and Russell Lindeman, Morgan and Natalie Russell, Grant and Will Fowler, and Gibson, Cash, and Harper Russell. She also leaves her dearest friend, Dr. Jeff Brewer. Visitation will be held at Memorial Park Funeral Home on Tuesday, February 9, from 5:00 PM to 7:00 PM, and the service will be held Wednesday, February 10, at 10:00 AM also at Memorial Park. Anne requested donations be made to Kingsway Christian Church music fund or MIFA. Click here to view the webcasted service: http://webcast.funeralvue.com/events/viewer/47625

Anne Rogers Russell was born on April 5, 1948 and passed away after a brief battle with cancer on February 7, 2021. The only child of John and Marjorie Rogers, Anne grew up on Peabody Avenue and was a lifelong Memphian. She attended Idlewild... View Obituary & Service Information