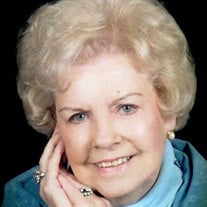 Anne Sayle Fuller was raised in Columbia, Tennessee, where she graduated from Columbia High School and then attended Sullins College in Bristol, Virginia. She was chosen Miss Maury County in Columbia and was Queen of the Mule Day Celebration. She... View Obituary & Service Information

The family of Anne Sayle Fuller created this Life Tributes page to make it easy to share your memories.

Anne Sayle Fuller was raised in Columbia, Tennessee, where she...