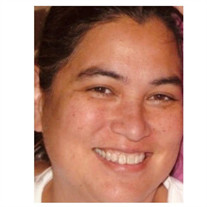 Anna Christine Powless, daughter of Clifford Oliver and Barbara Christine (nee Lipscomb) Powless, granddaughter of notable Lydia Wheelock Powless passed away November 14, 2020 from complications of Lupus. She leaves behind her tender wife of 27 years Marion “Morag” Chiles Powless and her heartstrings, their son, Alec Thomas MacNeil Powless. Her precious Aunt Linda K. Moore of Northbrook IL, who took her into her heart as family. Chris loved her family, music, and the beach. She had a charismatic, magnetic personality which made everyone know they were loved just as they were. Equality, fairness and the ability to laugh at yourself were prized traits. Her half-sister Rochelle Powless of Oneida and a host of nieces and nephews; of special note Clifford Allen “Cal”Lee. She is predeceased by her parents, her grandparents Willie Christine and Floyd Lipscomb, half-sisters Roberta Jean Powless Kinzhuma, and Rose Guyett. A member of the Oneida Tribe of Indians, one of the five Nations of the Iroquois Federation. A alumna of Briarcrest Baptist High School and The University of Memphis, Chris was a lifetime member of Tri-M and The International Thespian Society. Having sung on stages from Carnegie Hall, Radio City Music Hall venues and in the local area, Chris enjoyed both choral and solo work. A brief member of the Sweet Adeline’s she enjoyed writing and arranging music. Her most treasured song written was her son. A classically trained pianist she was debuted with the Brentwood Symphony as their Guest Concert pianist. A fan of Liza Minnelli, Dame Edna and Renée Fleming, she was versed in their works and prodded you to enjoy them as well...to the point of rabid annoyance. Her 20 years at The University of Memphis was special to her. The students would often seek solace in her office, to wit she would don her Dame Edna glasses and reassuringly wave imaginary gladioli and soothingly encourage them. Lunch at R. P. Trax outside was common. Laughter, a Marlboro and a forbidding gin and tonic on State time was never off limits. Private services have been held. Family asks in lieu of flowers that a donation to the Memphis Zoo be considered.

The family of Anna Christine Powless created this Life Tributes page to make it easy to share your memories.