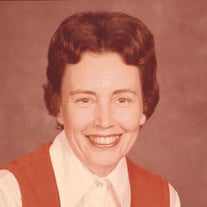 Ann Anita Strickland Vickery, 98, beloved wife of Duran McCurdy Vickery, Jr., went home to be with the Lord on August 26, 2021. Ann was born May 2, 1923, in Fitzgerald, Georgia, to parents Chester Strickland and Ellen Strickland. She was preceded in death by her husband of 65 years, her parents, and her sisters, Norma and Jane. Ann is survived by her two daughters, Susan Bray and Pam Fritchie, their husbands, David Bray and Denis Fritchie, and her nine grandchildren and 29 great grandchildren. Ann graduated from Fitzgerald High School in Georgia in 1940 and then went on to work for South Central Bell in Tallahassee, Florida, where she met the love of her life, Duran "Vic" Vickery in the spring of 1944, with marriage following that same November. Only a few short weeks later, Vic shipped out to serve his country with the Army Air Corp in WWII. Upon Vic's return from his tour of duty as a P-51 fighter pilot, the couple moved to Louisiana where Ann embraced her role of wife and mother, and was a consummate hostess for their large circle of friends from Metairie Baptist Church and their couples bridge club. Ann was sharp as a tack with a quick wit and melodious laugh accompanied by a constant twinkle in her eye. Ann's cooking was legendary, with her roast beef with rice and her Thanksgiving squash casserole being all time favorites. You could always find Ann in the kitchen showering love on others through her cooking. Ann and Vic were inseparable and had many travel adventures throughout their lives, including riding camels in Egypt and attending WWII reunions in Europe. In 2006, Ann and Vic moved to Tennessee from their longtime home outside of New Orleans to be closer to family. Since Vic's death in 2010, Ann has patiently awaited their reunion in heaven, and the family is thankful they are together once again. Ann was truly one of a kind and was always delighted to spend time with her children, grandchildren, and great grandchildren. She will live on in our hearts as an example of kindness and goodness and will be sorely missed. The family sends its deepest appreciation to all of the caregiving professionals who helped care for Ann during the last ten years of her life. God bless you all. The family will receive relatives and friends on Friday, September 3 from 12:00 pm until the time of the funeral service at 1:00 pm at Memorial Park Funeral Home and Cemetery, 5668 poplar Avenue in Memphis. The entombment will immediately follow.

Ann Anita Strickland Vickery, 98, beloved wife of Duran McCurdy Vickery, Jr., went home to be with the Lord on August 26, 2021. Ann was born May 2, 1923, in Fitzgerald, Georgia, to parents Chester Strickland and Ellen Strickland. She was preceded... View Obituary & Service Information