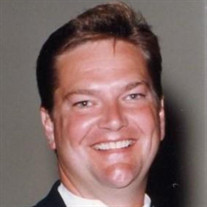 All too soon. much too soon we have lost our precious son, brother, husband and a devoted and much-loved brother of his faithful college “tribe.” Andrew Cornelius Van Vulpen, 57, passed away February 23, 2021 after a brief but devastating illness. His passing was seemingly gentle but again devastating to those who loved him unconditionally. Andrew was born July 27, 1963, in Memphis, TN to Richard N and Bettye Hays Van Vulpen. He is predeceased by his father, grandparents S.C and Caroline Heuback Van Vulpen and Willie and Mable Baker Hays. He is survived by his mother, his brother Leslie Jamison (Jamie) Van Vulpen, and Jamie’s wife LaJan, son Connor Andrew and daughter Bayli Marie of Cleveland,MS. He is survived by his wife Leigh Clark Van Vulpen and step-son Mark Hardy Clark, all of Germantown, TN, Thanks and praise must go to Leigh from every other family member for her total time, care and concern for her husband during his illness. We are all blessed to have had her, her sister Tammy, her brother Chip and her care at this sad time. Andrew was baptized as an infant at Prince of Peace Lutheran church in Southaven, MS and confirmed into full membership there when he was 12 years old. He attended Holy Cross Lutheran day school in Whitehaven, TN, graduated from eighth grade there, attended Memphis Preparatory School in Whitehaven, graduated from there and graduated from Memphis State University (now University of Memphis) with a degree in finance from the Fogleman School of Business. He entered the “bond business” and made a career that included both local and wide-area banking institutions. One of his biggest achievements was creating and owning his own bond company, Dearborn Capital Markets. Andrew was more than a capable sportsman. He was good at baseball, basketball, soccer and track, running in and finishing three full marathons. His sports that really won out for him was cheering for the Memphis Tigers and Grizzles Andrew was a wonderfully fun guy to know. A great memory included a “group” house by the college and a pet pig named Dennis. Yes, Dennis started small, grew large to say the least, and became famous when he was married to Miss Piggie during the Memphis in May festival on the Memphis waterfront…gala ceremony and all. A bit more must be said about his devotion to his college “tribe’ of Pi Kappa Alpha brothers plus some special “honoraries” and their devotion to him. The love and friendship among the boys grown into men has remained constant and firm. always faithful, always devoted, always loyal this tie will stand firm through each life of each member. Services for Andrew Cornelius Van Vulpen will be Sunday, March 7, 2021, at 2:00 p.m. at Memorial Park Funeral home, 5668 Poplar Avenue Memphis TN 38119. Visitation will be held from 12:00 noon to 2:00 p.m. Memorials in Andrew’s honor and memory may be made to the Andrew C. Van Vulpen Scholarship Fund, c/o 8679 Rocky Point Road, Memphis, TN 38018 or Prince of Peace Lutheran Church, 8089 Highway 51 North, Southaven, MS 38671 or another charity of one’s choice! The final and most generous gift that one could give has been given by Andrew himself, He is an organ donor! For those unable to attend the service please follow the link below. http://webcast.funeralvue.com/events/viewer/49679

All too soon. much too soon we have lost our precious son, brother, husband and a devoted and much-loved brother of his faithful college &#8220;tribe.&#8221; Andrew Cornelius Van Vulpen, 57, passed away February 23, 2021 after a brief but devastating... View Obituary & Service Information

The family of Andrew C. Van Vulpen created this Life Tributes page to make it easy to share your memories.

All too soon. much too soon we have lost our precious son, brother,...