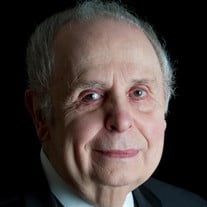 Allen Overton Battle, Ph.D., A.B.P.P., A.B.M.P. is now only with us in spirit as of 10 a.m. April 23, 2020. He attended: Immaculate Conception Cathedral School as a boy, Siena College where he graduated cum laude in Chemistry and Philosophy/Psychology; Biology Minor, The Catholic University of America where he got his M.A. in Clinical Psychology; Anthropology Minor, and also earned his Ph.D. in Clinical Psychology/ Anthropology; Psychiatry Minor there, and he interned at The University of Tennessee College of Medicine. He was a professor of psychiatry at The University of Tennessee for over 60 years and for much of that tenure he was Chief of the division of Clinical Psychology in the Department of Psychiatry. He also taught at The University of Memphis and Rhodes College. He saw many adults, children, and families as a part of his practice of psychology. He delivered and supervised psychological services for decades to the Juvenile Court of Memphis-Shelby County. He also provided assistance to DeNeuville Heights School for Girls for decades. He lived to try to help people, and to train health care professionals of all types in how to best serve their patients. He led the organization of the graduation ceremony at U.T. for decades because he loved the pageantry of honorably bestowing diplomas recognizing such hard work completed, and the ensuing solemn duties undertaken to future patients. He was a noted researcher, author, and a true humanitarian who was listed in several Who’s Who publications.. The honors that he was awarded attest to his frequent success in his endeavors. Among many other honors he was: a member of the Sigma Xi scientific society, invested in knighthood in the Order of the Hospital of Saint John of Jerusalem (Knights of Malta) for services to humanity, given a National Jefferson Award for outstanding service to America in public health (delivered by Justice Sandra Day O’Connor) for his co-founding of the Memphis Suicide Prevention and Crisis Center as well as for his cutting-edge training of the Memphis Police Crisis Intervention Team. He married Dr. Mary Vroman Battle, Ed.D. in 1953 after they met while at The Catholic University of America in Washington D.C. and they join again in death. They leave a surviving son, Allen III. He relaxed by playing the piano and going to films, concerts, ballet, and opera performances. He was a cultured gentleman who did far more than his duty. The world is a far better place to have had him in it. Memorials, fittingly, ought to be sent to the Memphis Crisis Center https://memphiscrisiscenter.org as he had a slight allergy to flowers… and a love of humanity. A visitation (with his cremains present) will be at Memorial Park Funeral Home on Poplar from 5 to 7 p.m. on Tuesday, September 7th. A funeralmass (in Latin) is planned for St. Theresa The Little Flower Catholic churchon Wednesday, September 8th, 2021, at 10:30 a.m. with burial to follow atCalvary Cemetery. The mass will be available online to view within a fewdays of the mass. Please go to the Memorial Park Cemetery obituary page(for Allen Battle) to get the link for the internet site to view the mass. The funeral mass can be viewed at the following sites, in order of best quality to least quality. https://vimeo.com/600586144/5f5c608feb https://www.dropbox.com/s/odo6um99vt5oo56/Allen%20Battle%20Funeral.greater.mp4?dl=0 https://www.dropbox.com/s/sznc15g5wkw80o6/Allen%20Battle%20Funeral.mp4.mp4?dl=0

The family of Dr. Allen O. Battle created this Life Tributes page to make it easy to share your memories.