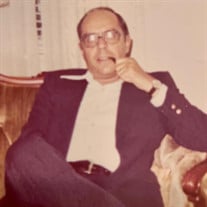 Alexander "Alex" Gogonelis peacefully passed away on December 22,2020 at the age of 91. He was a CPA serving clients in the Memphis area for four decades, retiring at the age of 87. Alex was preceded in death by his parents George and Elle Gogonelis, his wife of forty-four years, Georgia Gogonelis, and his son George Gogonelis. He is survived by his son Paul Gogonelis (Melissa), his daughter-in-law Margaret Gogonelis (George), his granddaughter Elizabeth Wheeler (Luke), his grandson Christopher Gogonelis and his great granddaughter Summer Wheeler. Alex graduated from Royal Technical College, Salford in Manchester, England where he was an active member of the Manchester International Club. He fondly recalled his days as a college student traveling across western Europe and his early career working in Brussels and the Netherlands. He recounted to willing listeners his story of leaving Germany and coming to Memphis and meeting his Greek bride. Alex loved and valued his friends and family and could always make them laugh with his charming, witty humor. He has been described by many as both a gentle man and a gentleman. Bringing his love of European football to America, Alex was one of the early pioneers in establishing youth soccer in Memphis, TN. He enjoyed all sports, and you could always find him watching football, basketball, golf, or his favorite soccer team Manchester United. Many also described him as a Renaissance man given his love for classical music, reading, and writing short stories. Alex also cherished his faith and was a member of the Annunciation Greek Orthodox Church, serving for many years on the board. He also was both a member and past officer of AHEPA Chapter #7. He will always be remembered as a loving husband, father, and grandfather, bestowing his wisdom in his beautiful cards he would write each year. Due to national health concerns, a graveside service will be held Tuesday, December 29, 2:00 pm, at Memorial Park Cemetery, 5658 Poplar Avenue, Memphis, TN 38119. 901-767-8930. In lieu of flowers, the family requests that donations be made to the Annunciation Greek Orthodox Church, 573 N. Highland Street, Memphis, TN 38122.

Alexander "Alex" Gogonelis peacefully passed away on December 22,2020 at the age of 91. He was a CPA serving clients in the Memphis area for four decades, retiring at the age of 87. Alex was preceded in death by his parents George and Elle... View Obituary & Service Information

The family of Alexander Gogonelis created this Life Tributes page to make it easy to share your memories.

Send flowers to the Gogonelis family.