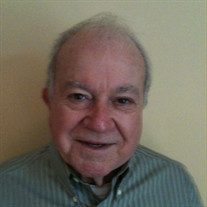 Dr. Albert “Dale” Buckley, born September 2, 1932, in Jasper County, Mississippi, died at the age of 87 in Memphis Tennessee. He was a resident of Memphis since 1979, prior to which he was a professor at Freed-Hardeman University, a part-time Minister, and an antique dealer. Dale was one of four children growing up in rural Mississippi. He was born to Vera Lee Williams Buckley and William Washington Buckley along with his three siblings, William Donald Buckley, Vera Patricia Buckley Clark (deceased), and Judy Ann Buckley Webster. After graduating from New Albany High School in MS, he achieved an AA degree from Freed - Hardeman, two Masters Degrees from Harding and David Lipscomb University in Bible and Business, and a PhD in Business from Georgia State (which made him a Doctor, but not the kind that can do you any good). He also met his former wife and mother to their seven children, Lora Ann Oliver, at Harding University and they served as missionaries in Glasgow, Scotland from 1957-1964. When they returned to the United States, Dale taught at Freed - Hardeman and opened up his home to a girl in an iron lung so that she could attend college. He even baptized her in the bathtub of their home. Dale was a master story-teller, a Bible Scholar, an accomplished pianist, a missionary, a preacher, a father, a “Grandaddy Clock-Clock”, a brother, an uncle, and a joyful yet brutally-honest man. His humor and personality were infectious to all that were fortunate enough to be drawn under his magical spell, and he never met a stranger. He loved life -- he loved lunches at Piccadilly after church services, eating birthday cake before the meal, taking his grandchildren to “Little Town” to get candy, and listening to ABBA-- really loud. As the Proprietor of Buckley’s Antiques for over 30 years, he was once referred to as “The Dean of the Antique Scene” by the Memphis Commercial Appeal. He was always there for his children and led them through example, counsel and wisdom. He gave the best advice, sometimes even when asked for. He will sorely missed by his children: Jerry Dale Buckley, Phyllis Leigh Buckley Simpson, Cynthia Ann Buckley Wuerdeman, Barry Glenn Buckley, Amber Lynn Buckley Lyons (now reunited in heaven), Vicky Lou Buckley and his baby, Amy Cheryl Buckley Grant. They share their grief with their spouses, Judy Tune Buckley, John James Simpson, John Wuerdeman, Kelley Buckley, Jim Spore and Carey Grant. Dale met his Life Partner, Danny Winchester, in Memphis in 1979 and they remained inseparable for 38 years. Both families mourn together in their common loss for an irreplaceable man. Although Dale never got the chance to travel to Africa, he had a deep and abiding love for the country, and through his altruistic efforts, water, nourishment and education were provided for hundreds of children in Zambia. In addition to his Partner, children and siblings, Dale is survived by 16 grandchildren: Chris and Kevin Buckley, Matthew, Paige and Lora Wuerdeman, Allison Eaton, Greg and Kaylon Buckley, Jennifer Buckley Cranford, Spencer Lyons, Connor Lyons, Portia Scovern, Asa Scovern, Haze Scovern, Victoria Grant, and Sophia Grant. The family will receive relatives and friends on Wednesday, February 5 from 10:00 am until 11:00 am at Memorial Park Funeral Home, 5668 Poplar Avenue in Memphis. There will be a graveside service presided by Dr. Milton Sewell at 11:00 am at the Memorial Park Cemetery Rotunda. In lieu of flowers, the family requests donations to the Amber Buckley Lyons Memorial Endowment Campership, information at fhu.edu/msyc, a fun established in loving memory of his daughter, Amber Buckley Lyons

Dr. Albert &#8220;Dale&#8221; Buckley, born September 2, 1932, in Jasper County, Mississippi, died at the age of 87 in Memphis Tennessee. He was a resident of Memphis since 1979, prior to which he was a professor at Freed-Hardeman University,... View Obituary & Service Information

The family of Dr. Albert "Dale" Buckley created this Life Tributes page to make it easy to share your memories.

Send flowers to the Buckley family.