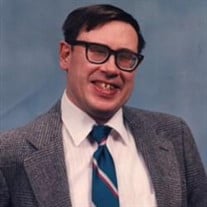 Alan E. Rice, 71, passed away peacefully in his sleep of natural causes at Bright Glade Nursing Home in Memphis on August 13, 2021. Born prematurely on February 27 1950 in New Haven, CT, he was diagnosed with cerebral palsy and was later declared legally blind. At 16 a brain X-ray revealed more brain damage and he was diagnosed with organic paranoid schizophrenia. He struggled with physical and mental illness all of his adult life. Still, especially in his younger years, he managed to genuinely enjoy life. In 1961 he moved to Memphis, TN from West Haven, CT with his parents and his sister. He graduated from the Shrine School for Handicapped Children (now Shrine School for Children with Special Needs) in 1969 and earned his BA in History from Memphis State University in 1975. He loved Civil War history and was a self-taught expert. He would regale anyone who would listen with detailed accounts of obscure battles and generals. He delighted in visiting famous battlefields and monuments with his parents A highlight of his life was the summer he worked at the Pink Palace Museum researching Civil War records. He also volunteered at the Lowenstein House for over 20 years, doing clerical work and writing the monthly newsletter. He was a long-time member of Second Baptist Church in Memphis, and as a member of the youth choir, visited a Caribbean island. In later years, lack of transportation prevented him from attending services. He was predeceased by his mother Mary Grace Rice, his father, Bradford H. Rice, all of his grandparents, aunts and uncles, and 5 of his cousins. He leaves his older sister Barbara Burnett of Montpelier, VT and many other cousins. A graveside service will be held on Thursday, September 2, 2021 at 2:00 p.m. and Alan will be buried in the family plot, next to his parents at Memorial Park Cemetery. In lieu of flowers, donations in his memory may be sent to: Shrine School, 4259 Forest View Dr. Memphis, TN 38118, attention: Miss Livingston, write “In memory of Alan Rice” on the check memo line.

Alan E. Rice, 71, passed away peacefully in his sleep of natural causes at Bright Glade Nursing Home in Memphis on August 13, 2021. Born prematurely on February 27 1950 in New Haven, CT, he was diagnosed with cerebral palsy and was later declared... View Obituary & Service Information

The family of Alan E. Rice created this Life Tributes page to make it easy to share your memories.

Alan E. Rice, 71, passed away peacefully in his sleep of natural...

Send flowers to the Rice family.