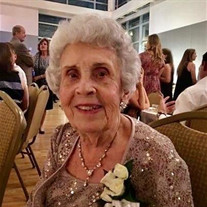 Ada Marie "Re Re" Springfield Bell

Ada Marie “Re Re” Springfield Bell, 93, went to be with the Lord on January 5, 2020. She was born on June 19, 1926 in Memphis, TN to James Whitcomb Springfield, Sr. and Sidney Edith Driver Springfield of Memphis. She graduated from Treadwell High School and attended Memphis State College (currently U of M) where she was a basketball cheerleader and member of Phi Mu Sorority. She was a homemaker and office supervisor for the University College at the University of Memphis. She attended Highland Heights Methodist Church from "cradle roll" into her adult years where she sang in the choir. In 1950 she married John Reid Bell, Sr. at Highland Heights Methodist Church until she joined her husband at Evergreen Presbyterian Church. Fifty years later they had their Golden Wedding Anniversary at Evergreen Presbyterian Church. In her final years she was a member of Buntyn Presbyterian Church. Supporting her family was her passion and she was the "lead" cheerleader for her sons’ various sports activities. She was an avid fan of the Memphis Tigers Basketball program and the Atlanta Braves. She could be found watching these games on TV or listening to them on the radio. Maintaining her yard was another favorite past time. She would work from sun up to sun down perfecting her yard! One of her proudest accomplishments in her later years was becoming a member of the Hermitage Chapter of the Tennessee Daughters of the American Revolution. After receiving her own membership into the DAR she facilitated her granddaughters in obtaining their memberships. She was preceded in death by her parents, Mr. and Mrs. James Whitcomb Springfield, Sr., her brother, James Whitcomb Springfield, Jr., and her husband, John Reid Bell, Sr. She is survived by her two sons and their wives, John Reid Bell, Jr. (Vicki) of Collierville, and James Robert Bell (Debbie) of Collierville. She leaves behind six grandchildren that she adored and eight great grandchildren. In her final years she enjoyed singing hymns in the parlor with friends from her assisted living community and telling her family how much she missed her church and those days of singing in the church choir. During her last days with family she continued to sing from her bed until she joined the choir in heaven. The family will have a private service at Memorial Park Funeral Home. Interment will be in Memorial Park Cemetery. In lieu of flowers the family requests any memorials be sent to the charity of the donor's choice.

The family of Ada Marie "Re Re" Springfield Bell created this Life Tributes page to make it easy to share your memories.

Send flowers to the Bell family.